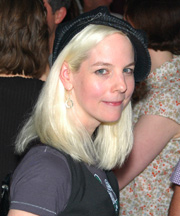 An oblivious single mom, in a hurry to leave on a datewhat’s she going to do when Deathyou know, The Grim Reaper, with the shroud and the scytheappears at the door instead of the teenage babysitter? Slip Death a few bills and head out the door, of course, leaving little 9-year-old Whitney to show Death how to play her favorite violent video game and make macaroni and cheese out of a box.

Snively, who holds a master of fine arts degree in filmmaking from the Academy of Art in San Francisco, was one of eight women selected for the prestigious workshop, a unique training program for aspiring directors that coaches them through the development and production of a short narrative film.

An adjunct professor in Notre Dame’s Department of Anthropology, Snively teaches a popular course titled"Cultures of Fear: Anthropological Perspectives of the Horror Film."Her husband and executive producer of her films is Agustin Fuentes, professor of anthropology and director of the University’s Institute for Scholarship in the Liberal Arts (ISLA).

Horror is a curious career choice for Snively, who was never allowed to watch horror movies as a child.

“I was diagnosed as having an overactive imagination,”she says.“The doctors thought horror movies would be disturbing for me, since I had nightmares. I guess it’s a bad thing to be overly creative.”

Years later, as a struggling screenwriter, she realized the only way to get her movies made was to make them herself.

“I also knew I had no money,”she says.“When you’re making a film with no money, there are two choicesdocumentaries or horror.”

She tried documentaries, but wanted to do narrative film. So she put herself through a crash course in the history of the horror genre, from"The Cabinet of Dr. Caligari"to"Psycho"to contemporary slasher films.

Snively’s previous short filmswhich have been featured in more than 100 film festivals worldwideinclude"Teenage Bikini Vampire,""Confederate Zombie Massacre"(“It’s love and gore in the Civil War!”), and"Raven Gets a Life,“featuring a 150-year-old manic-depressive vampire trapped in the body of a 12-year-old girl. Then there’s”Meat is Murder,"about a killer meatloaf. The films were all shot in the South Bend area, and none cost more than $1,000 to make.

“We have our own equipment, but you call in a lot of favors,”she says.“We’ve made five short films and a feature since we moved here in 2002, and their combined cost is less than ‘Death in Charge.’ People here are so generous with letting us shoot on location, offering food and props and discounts. It’s a very supportive community.”

“Death in Charge”was shot on a soundstage in Los Angelesone of the requirements of the workshop.

“It was wonderful,”Snively says.“Expensive, but wonderful. When you’re on location you have planes going over, and cars driving by, and you have to work within the confines of the space. On the soundstage, we could shoot down without having to worry about seeing our reflections in the windows, or where to hide the lights, people and wires.”

The film premiered in Los Angeles at a showcase featuring all eight films.

“This was not my target audience,”Snively says.“There was one other horror film, but the others were romantic comedies and dramas about women’s issues. When mine came on, the audience was laughing and laughingÖuntil we got to the climax.”

It ranks as one of her favorite moments in life, she saysan audience of 380 people gasping at once.