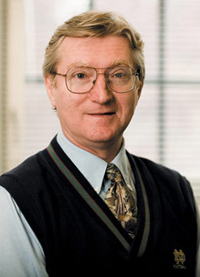 The Defense Advanced Research Projects Agency (DARPA) has awarded a team of researchers led by Wolfgang Porod, Freimann Professor of Electrical Engineering and director of the University of Notre Dame’s Center for Nano Science and Technology, a $9.9 million grant to explore logic in a magnetic system, which may open the door to all-magnetic information processing systems.

The Notre Dame team includes Gary Bernstein and Gyorgy Csaba of Electrical Engineering, Sharon Hu and Michael Niemier of Computer Science and Engineering, and Joe Nahas, a visiting professor who previously has worked for Motorola and Freescale on magnetic memory chips.

Also participating in this Notre Dame-led research are the University of California at Berkeley, the Technical University of Munich, and IBM and Grandis, two companies that are pioneers in developing and licensing innovative non-volatile memory solutions derived from cutting-edge research in spintronics.

Porod is co-inventor, with Craig S. Lent, a Freimann Professor of Electrical Engineering at Notre Dame, of Quantum-Dot Cellular Automata (QCA), a transistorless approach to computing. The current research, called “Nano-Magnet logic (NML),” can be viewed as a magnetic implementation of QCA.

Conventional microelectronic technology has relied on shrinking transistors to produce increasingly smaller, faster and more powerful computers. However, because the laws of physics prevent conventional devices from working below a certain size, that method is nearing its physical limits.

QCA leapfrogs that barrier with an entity known as a “quantum dot,” a tiny structure in which an electron can be confined. These quantum dots can be created and arranged into cells through microelectronic techniques, and in turn, these cells can be lined up end to end to form “binary wires” or arrayed to form switches and various computer logic devices.

And since it does not rely on flowing electrons to transmit a signal, no electric current is produced and heat problems are avoided.

However, as Porod and other Notre Dame researchers have attempted to implement the original charge-based QCA concept, they have encountered certain challenges in its applications. Stray charges from the quantum dots presented difficulties and current technological limitations in fabrication meant that QCA operating temperatures had to be extremely low, thereby reducing its practical applications.

As an alternative, Porod and Notre Dame researchers Alexandra Imre, Alexei Orlov and Gary Bernstein, in conjunction with Csaba, then with the Institute for Nanoelectronics at the Technical University of Munich, decided to study magnetic systems for QCA implementations.

Magnets are already being used in memory and data storage, but the Notre Dame team’s research demonstrates that nanomagnets can be used for logic functions.

“In our opinion, the main significance is the demonstration of logic in a magnetic system, which opens the door to all-magnetic information processing systems, including memory and logic,” Porod said.

“Advantages of nanomagnet logic include room-temperature operation, and this technology also leverages advances made by the magnetic-storage industry for patterned magnetic media. In addition, NML is non-volatile, which means that the information is not lost when the chip is powered down, offering instant-on computers, without the need for lengthy start-up procedures when turning the computer on.”

One of the main advantages of NML is that it requires only low power to operate and a potential application of the magnetic version includes portable systems where power is at a premium. Energy is lost in conventional systems because of the heat generated by the flow of electrical currents, but NML won’t have these losses due to the use of magnetic phenomena. This technology may also lead to an all-magnetic information processing system, including memory and logic, which uses little or no electricity.

“In the future, we would like to fabricate larger structures, beyond the single majority logic gate demonstrated so far,” Porod said. “Also, we would like to realize electronic ways to set the input and to read the output. So far, inputs are set by external magnetic fields.”

The DARPA grant builds on a foundation laid with the establishment of MIND, the Midwest Institute for Nanoelectronics Discovery, and Notre Dame’s Strategic Research Investments (SRI) Program.

MIND explores and develops advanced devices, circuits and nanosystems with performance capabilities beyond conventional devices. Led by Notre Dame, MIND is a consortium of academic, industry and government partners that includes Cornell University, Georgia Institute of Technology, Pennsylvania State University, Purdue University, University of Illinois, University of Michigan, University of Texas-Dallas, Argonne National Laboratory, the National Institutes of Standards and Technology, and the National High Magnetic Field Laboratory. MIND is supported by the Nanoelectronics Research Initiative of the Semiconductor Research Corporation (SRC-NRI), a variety of industry partners, the state of Indiana and the city of South Bend.

SRI is a program that has invested $80 million of Notre Dame’s own money in a handful of programs, including NDnano, to advance the scope, excellence and visibility of its research enterprise. One of the SRI-funded projects supports the Notre Dame Nanoelectronics Research Initiative, which explores new device concepts and associated architectures that are enabled by novel phenomena on the nanometer scale. SRI also supports equipment infrastructure in the new Stinson-Remick Hall of Engineering, a $73-million building, 40 percent of which is devoted to nanoelectronics and related nanotechnology research.

“Notre Dame’s strategic investment in research has been crucial in making us successful to win this highly competitive DARPA award,” Porod said.