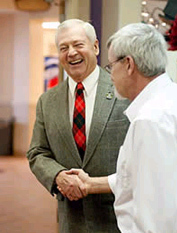 Among the many people whose lives were diminished by the death of James D’Arcy Chisholm last Sunday are his adored wife Joyce, his seven children and 14 grandchildren, the entire Notre Dame family, and thousands of homeless people who wouldn’t recognize his name.

Chisholm was 77 years old when he died of a stroke, an anomalous age for a man who remained so vigorous and cheerfully gregarious even as declining health and mental confusion began to exact their toll.

He grew up in Erie, Penn., and something of that town’s blue collar and rust belt toughness seemed always seemed to linger about him. A proud 1956 graduate of Notre Dame, he took a long time to obtain his diploma, interrupting his sophomore year for a stint in the Marine Corps and such harrowing combat service in Korea, where he served as a forward observer for artillery, that he was twice decorated with the Purple Heart.

After his graduation, he left for Southern California, where he lived, worked and was conventionally successful for the next quarter of a century. He was, among other things, president of the Chamber of Commerce in Lancaster, Calif.; West Coast manager of industrial development for the Del Webb Corporation; vice president of Southern California operations with Milton Meyer and Company Realtors; president of Capital Real Estate Management Company and a trustee of Angeles Mortgage Investment Trust. In addition to real estate, he dabbled in politics and government, serving as a consultant for California Governor Pat Brown and as a transition team member for then-Governor Ronald Reagan.

Tiring of all that (although, ex-Marine that he was, he would occasionally describe his disillusion in saltier terms), he returned to Notre Dame in 1980 to work as assistant director in the Institute for Church Life, in those days called the Institute for Pastoral and Social Ministry. The California businessman’s career move was not, to put it mildly, a salary upgrade. Savoring a single-malt scotch one night in the back bar of the old University Club, he mockingly rebuked a commiserating colleague, saying “You’re just in this racket for the money. I’m in it for the football tickets.”

But it was more than the football tickets and the token wage that drew D’Arcy Chisholm back to Notre Dame. As was apparent to anyone he met, worked or celebrated with, he was conspicuously blessed with the hunger and thirst for justice described in the Sermon on the Mount. And as much as he loved to be at the lavishly sung and enacted Sunday liturgies of the Basilica of the Sacred Heart, his approach to the beatitudes was more fiery than pious.

He couldn’t disguise his annoyance with institute programs and boredom with institute discussions which did not directly bear on serving the needs of poor and marginalized people, and his blunt expressions of impatience could occasionally startle academics and administrators whose personal histories and professional backgrounds had less military, business and political rough-and-tumble than his own. The vigor and success of the service programs of Notre Dame’s Center for Social Concerns owe much to Chisholm’s prodding.

With his friend David Link, who was then dean of the Notre Dame Law School and is now a priest in prison ministry, Chisholm began volunteering in various local shelters for homeless people, and “the Odd Couple,” as they were soon called, became increasingly involved in efforts to provide food, clothing, shelter and hope for Michiana’s most vulnerable people.

Their efforts, enhanced by Chisholm’s financial shrewdness and well honed aptitude for acquiring agreeably priced real estate, made possible the foundation of South Bend’s Center for the Homeless in 1988. The center site was a large downtown building in South Bend, on the market for $400,000. Chisholm, with customary timidity, offered its owners $62,000. They eventually agreed upon $100,000, which the Odd Couple had hastily borrowed, and which Notre Dame, among other area institutions, soon helped them pay off. Now one of Michiana’s proudest boasts, the center is a national model of effective and compassionate response to an intolerable social problem. Chisholm was the most enthusiastic of boosters for the center he co-founded right up to the last weeks of his life. He and Joyce spent most of their last Christmas together serving a meal there.

A funeral Mass for Chisholm was celebrated Monday (May 11) at 9:30 a.m. in the
Basilica of the Sacred Heart. Notre Dame’s president emeritus Rev. Edward Malloy, C.S.C. presided at the Mass, and Rev. David Link was among the concelebrants. Rev. Robert S. Pelton C.S.C., former director of the Institute for Pastoral and Social Ministry, preached. Burial followed at Cedar Grove Cemetery on campus. A bagpiper played the Marine Corps hymn, and, according to Chisholm’s long standing arrangements, the pall bearers were all guests and staff of the homeless center.

Years ago, speaking affectionately of the Notre Dame family and its home, the most
revered of Notre Dame’s bachelor dons, Frank O’Malley, reminded his students that “there is blood in these bricks.” Members of that family know that while their faith can barely glimpse the splendor of D’Arcy Chisholm’s new home, here in his old one, and theirs, his blood already wonderfully replenishes the masonry around them.