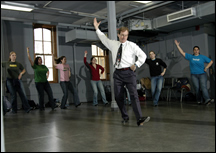 Jim McKenna, Joyce Professor of Anthropology and the departments chair, is one of Notre Dames most renowned social scientists. But theres something that comes more naturally to him than anthropology: tap dancing.

Since he saw his first tap routine on television, McKenna has been tapping. The experience was, in his words, simplyirrepressible.

It was nothing I chose. It chose me,says McKenna, who straps on tap shoes every semester to pass on his knowledge through an Irish tap class. Each class attracts up to 50 students who cram into the lower level of Washington Hall to learn how be lighter on their feet.

Raised inBerkeley,Calif., in the 1950s, McKenna became a child dancer of regional note. In one of his first teaching positions, atPomonaCollegeinCaliforniain the 1980s, he walked over to the dance department and offered to teach a tap dancing class. They let him, and he hasnt stopped.

Arriving at Notre Dame in 1997, McKenna transported his irrepressible gift to the Irish tap classes.

Why is the class so popular?Its such joyful exercise,says McKenna, his eyes flashing with excitement.It releases endorphins . . . flushes out the systema good reliever of the stresses caused by college life.

Teaching the class connects McKenna to a passion. But he also does it because he thinks its valuable for students to see another side of their professorsthe side that makes mistakes and doesnt know everything.

For McKenna, whether hes teaching anthropology or dance, its all about making learning unintimidating.And this means admitting when he makes mistakes while demonstrating the complex footwork.This creates a relaxed atmosphere where, in McKennas experience,students dont want to let you down because they care about you.

Walk into the basement of Washington Hall during class and youll see proof that his philosophy works.Students of every gender, major and dancing ability earnestly tapping away, sweating, pulling layer after layer of clothing off, opening the windows to cool off, follow the lead of Jim McKenna, who looks relaxed and lighter than air, even while looking professorial, his tie still knotted and his sleeves rolled down.