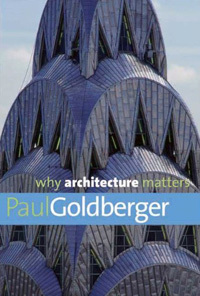 Paul Goldberger, architecture critic for The New Yorker, will give a talk titled “Why Architecture Matters” at 4:30 p.m. Feb. 1 (Monday) in 104 Bond Hall at the University of Notre Dame School of Architecture.

The event is free and open to the public and a book signing will follow the lecture. Please note that this lecture is rescheduled from its original date in November.

A Pulitzer Prize-winning journalist, Paul Goldberger has written The New Yorker’s celebrated “Sky Line” column since 1997. He began his career at The New York Times, where in 1984 he received the Pulitzer Prize for distinguished criticism, the highest award in journalism.

He is the author of many books, including “Why Architecture Matters,” published in 2009 by Yale University Press, and “Building Up and Tearing Down: Reflections on the Age of Architecture,” a collection of his essays published in 2009 by Monacelli Press. His talk will engage new material presented in these books. Copies of each will be available for purchase.

Goldberger lectures widely around the country on the subject of architecture, design, historic preservation and cities. He appears frequently on film and television to discuss these issues, and is now at work on a program on the architect Benjamin Latrobe for PBS. He serves on the jury for the Richard H. Driehaus Prize, a $200,000 prize awarded annually for traditional architecture and urbanism administered through the University of Notre Dame.