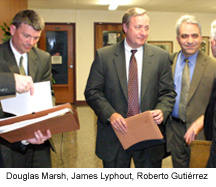 A three-year process of negotiation among the University of Notre Dame, local government officials and the general public came to a successful conclusion Tuesday night (June 8) when the St. Joseph County Council unanimously voted in favor of a Notre Dame proposal to close Juniper Road through campus, realign Edison Road and make changes to several other streets through and adjacent to its property.p. Meeting in the County-City Building in downtown South Bend, council members heard final public comments on the Notre Dame plan before voting on two bills.p. “Notre Dame and the community have a long tradition of doing things at the right time, from creating neighborhood leadership projects to the development of collaborative social outreach programs in service of the entire region,” said J. Roberto Gutiérrez, Notre Dame’s vice president for public affairs and communication. “This agreement is one more example of the wonderful ways in which the University, city, county and local citizens work together to create a stronger community.”p. With the approval process complete, Notre Dame now can move forward with plans to close the section of Juniper that bisects the campus and shift traffic to a new road to be constructed next to the eastern edge of the University.p. “Rerouting thru traffic to a new north-south corridor will make life better for everyone,” said Douglas Marsh, University architect.It will improve travel times for people traveling in every direction."p. The closure of Juniper also will improve safety for pedestrians on campus and provide the University with open space for future development without extending the existing campus borders.p. A second and related part of the plan will allow for the rerouting of Edison Road and a small section of Angela Boulevard on the south side of the campus. The east-west road, which currently curves between Notre Dame Avenue and Eddy Street, will be straightened, providing space for a park-like public area south of the Universitys soon-to-open Marie P. DeBartolo Center for the Performing Arts.p. The cost of the Juniper project has been estimated at $10 million, and the Edison project has been estimated at $6 million. There also will be additional costs for associated on-campus road and parking changes. Notre Dame will pay for all work.p. Marsh, Jackie Rucker, the University’s director of community relations, and other Notre Dame officials held more than 200 meetings with government officials and local residents to find a plan that addressed the needs and concerns of all parties.p. “The University has spent an enormous amount of time working with every constituency and has learned a great deal,” said James Lyphout, vice president for business operations. "I believe this process has allowed us to address all reasonable concerns, and now we can continue the implementation of our Campus Master Plan, which will benefit both the University and surrounding community.p. “This has been an exemplary model of how universities and host communities can work together.”p. St. Joseph County Commissioner Mark Dobson and members of the county council concurred with Lyphout’s assessment of the process.p. “The pleasure in this has been Notre Dame’s response” to local concerns, said Dobson, who also added that the open and constructive give-and-take between the University and residents can serve as a model for future county proposals that may be controversial.p. Rev. Edward A. Malloy, C.S.C., Notre Dame’s president, attended the meeting and addressed the council on behalf of the University.p. “This process has been complicated and long, but I am confident that the end result is much better than what we started with,” Father Malloy said.p. Marsh said the road construction will begin no earlier than the spring of 2005.p.