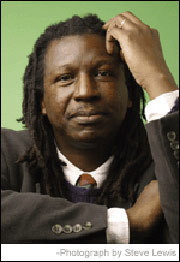 Cornelius Eady, associate professor of English and director of the Creative Writing Program at the University of Notre Dame, will receive (along with Toi Derricotte) the 2008 Elizabeth Kray Award for service to the field of poetry.

The prize, presented by Poets House, a national poetry library and literary center, will be awarded June 9 (Monday) at the 13th annual Poetry Walk Across the Brooklyn Bridge.

The Kray Award honors individuals whose service to the field of poetry embodies the spirit of Poets House co-founder Elizabeth Kray, who served as an innovative advocate of a greater presence for poetry in the United States.

In 1996, Eady and Derricotte co-founded Cave Canem, a national community of African-American poets committed to the discovery and cultivation of new voices in African-American poetry.An initial gathering of 27 poets, Cave Canem has become an influential movement with a fellowship of more than 250 poets residing in 34 states.

Eady is the author of seven books of poetry, includingHardheaded Weather;Brutal Imagination,which was a 2001 National Book Award finalist;The Gathering of My Name,nominated for the 1992 Pulitzer Prize; andVictims of the Latest Dance Craze,winner of the 1985 Lamont Prize from the Academy of American Poets.

Eadys work in theater includes the libretto for the opera,The Running Man,which was a finalist for the Pulitzer Prize in Drama in 1999, and his play,Brutal Imagination,won Newsdays 2002 Oppenheimer Award for the best first play by an American playwright.A recipient of the Prairie Schooner Strousse Award, Eady also has won fellowships from the National Endowment for the Arts and Guggenheim, Rockefeller and Lila Wallace-Readers Digest Foundations.