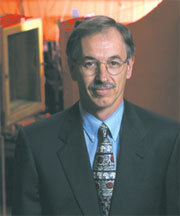 Fellow is the highest elected grade of membership in ASME and is conferred upon a member with at least 10 years of active engineering practice who has made significant contributions in the field. Corke is theninth member of Notre Dames aerospace and mechanical engineering faculty to be named a fellow, joining Hafiz M. Atassi, Patrick F. Dunn, Frank P. Incropera, Thomas J. Mueller, John E. Renaud, Mihir Sen,Albin A. Szewczyk, and Kwang-Tzu Yang.

Corke, who also is founding director of Notre Dames Center for Flow Physics and Control, specializes in the study of fluid mechanics. He earned his bachelors, masters and doctoral degrees, all in mechanical and aerospace engineering, from the Illinois Institute of Technology (IIT).He joined the ITT faculty before completing his doctorate in 1981 and reached the rank of full professor there before coming to Notre Dame in 1999.