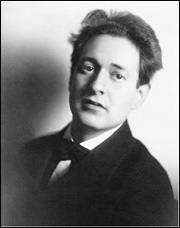 A concert celebrating the works of Academy Award-winning Austrian composer Erich Wolfgang Korngold (1897-1957) will be held Monday (Oct. 29) at 4:30 p.m. in the Penote Performers Hall of the University of Notre Dames DeBartolo Center for the Performing Arts.

Admission is $3 and tickets are available by calling the performing arts center box office at 574-631-2800.

The program, featuring pianist Daniel Schlosberg, artist-in-residence at Notre Dame, is the first event in a series of performances to be held nationwide in tribute to Korngold on the 50th anniversary of his death.

A key film composer from Hollywoods Golden Age known for such scores asThe Adventures of Robin Hood(1938), for which he won one of his two Oscars, Korngold grew up in turn-of-the-century Vienna, and wrote his celebrated Piano Concerto No. 2 in E Major at the age of 13.

Other performances in the series will be held on Nov. 2 in New York City, Nov. 9 in Washington, D.C., Nov. 11 in Baltimore, Dec. 7 in Chicago, and Dec. 16 in Los Angeles. A complete schedule is available on the Web at www.thekorngoldproject.com .

A Los Angeles native, Schlosberg appears regularly on such series as Bargemusic in Brooklyn, N.Y., and the Embassy Series in Washington, D.C., and on live radio broadcast recitals from the Los Angeles County Museum of Art. Prior to being appointed artist-in-residence at Notre Dame, he served as an accompanist in Sarasota, Fla., and Shelter Island, N.Y., for the Perlman Music Program, headed by faculty violinist Itzhak Perlman. He held the 2000 Leonard Bernstein Fellowship in piano at Tanglewood in Boston.