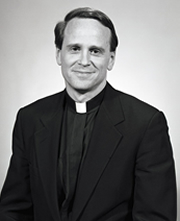 Provost Nathan Hatch will chair a committee drawn from throughout the University of Notre Dame to plan activities for the inauguration of Rev. John I. Jenkins, C.S.C., as the Universitys 17th president.

The events are tentatively scheduled for Sept. 22-23, 2005.Among the possibilities to be considered, Hatch said, will be a symposium involving high-profile international leaders on Thursday, Sept. 22.The inauguration itself will be on the following day.

Wed like to envision an intellectual gathering of the highest caliber that will represent the kinds of discussion and inquiry that are possible at Notre Dame,Hatch said.He noted that an internally significant event such as the inauguration is also an opportunity to exhibit the Universitys identity and aspirations to those beyond our campus borders.

Activities on Friday would likely include a Mass in the morning, a luncheon, and an academic convocation and inauguration in the afternoon, Hatch said.

The committee planning the events was formed by Father Jenkins and Patrick McCartan, chairman of the Board of Trustees, and includes wide representation of the University community.Assisting Hatch as vice chairs are William Goodyear, a trustee, and John Affleck-Graves, executive vice president.Other members are drawn from the Board of Trustees, alumni, administrators, faculty and the student body.

Father Jenkins, 50, was elected this past April by the Board of Trustees to a five-year term, succeeding Rev. Edward A. Malloy, C.S.C., 63, who has been president since 1987.Father Jenkins, now serving as president-elect, was formerly a vice president and associate provost of the University and is an associate professor of philosophy.He will officially take over the presidential responsibilities from Father Malloy on July 1.