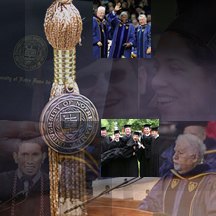 Outgoing Notre Dame President Rev. Edward A.MonkMalloy, C.S.C., and Provost Nathan Hatch were lauded Sunday by Commencement speaker Vartan ** Gregorian aschampions of equal opportunity, social and economic justice, of civil rights, of the right to a better life for the poor and downtrodden.

Father Malloy, Hatch and Gregorian were among 15 dignitaries and more than 2,900 students to receive bachelors, masters, doctoral or honorary degrees during the Universitys 160 th Commencement exercises in theJoyceCenter. **

Gregorian, president of the Carnegie Corporation and former president of Brown University, reflected on the place of faith and religion and their relationship to science and reason, and declared Notre Dame graduates lucky:Because you have been educated at an institution at which neither the sacred nor the profane are ever taken for granted.

He earned audience applause as he lamented:Those who are using God to back up assorted political slogans seem to have forgotten the Second Commandment Thou shalt not take the name of the Lord, thy God, in vain.

Gregorian implored students:Be aware of the forces in society that will attempt to reduce you into mere socioeconomic or entertainment units, born and destined to be relentless consumers. Remind yourself that you are, instead, rational, social and spiritual beings.

If we are to be a genuine and sincere community, we must look beyond the stereotypes that blind us,he said.We need each other. We dont have a person to waste. The University must not shrink from its responsibility to embrace new forms of diversity. And as graduating seniors, we must not lose sight of the value of such diversity.  As a Notre Dame family, we need to question the supposed wisdom that divides us.

Dr. Joseph E. Murray, the Nobel laureate who performed the first successful organ transplant 51 years ago, received the 2005 Laetare Medal, the oldest and most prestigious honor given to American Catholics.

The self-described product ofthe local nunsin his home of Milford, Mass., Dr. Murray opened a field that today has seen more than 400,000 transplants and that redefined death not as the cessation of heart and lung function, but as the cessation of the brain. Now 86, Dr. Murray told graduates he considers life not a waning candle buta flaming torch to be held high for future generations to follow.

Father Malloy and Hatch made only brief references to their pending job changes. Stepping down after an 18-year presidency, Father Malloy said he was experiencingnothing but gratitudefor his years as president. He urged graduates to cherish their friends and be faithful to God.

The greatest compliment you can pay to the teachers youve had here is to be lifelong learners,he said.

Hatch, who is assuming the presidency ofWakeForestUniversity, called Notre Damethe most interesting experiment in higher educationanda verdant spring in a land too dry and thirsty for wisdom.

Hatch also acknowledged the work of Eileen Kolman, outgoing dean of the First Year of Studies Program, for her 15 years in that position.

Degrees were conferred on 2,040 undergraduates, 274 masters and doctoral students in theNotre DameGraduateSchool, 398 masters degree students in the Mendoza College of Business, and 205 Notre Dame Law School students —195 with the juris doctor degree, nine with the master of laws degree, and one with the doctor of juridical science degree.