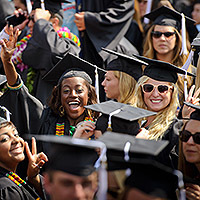 “‘It’s not the library, as first-rate as it is. It’s not the professors and the courses, as stellar as they are. It’s not the campus, as enchanting as it is, or even the football team, as legendary as it is, or even the magnificent service projects,’” Cardinal Dolan told the graduates. “‘No, the secret of Notre Dame is really a person, who we Jews call Miriam and you Christians call Mary. She’s there. She looks down from that Golden Dome, and if you really want to discover the secret of Notre Dame,’ my friend went on, ‘visit that Grotto that you Catholics call Lourdes. There’s something there. No, he concluded, there’s someone there. We call her Notre Dame and she’s the secret of this university.’”

Cardinal Dolan is archbishop of New York and president of the U.S. Conference of Bishops. He received an honorary doctor of laws degree at the ceremony, at which 2,078 undergraduates received their diplomas on Sunday (May 19) in Notre Dame Stadium. 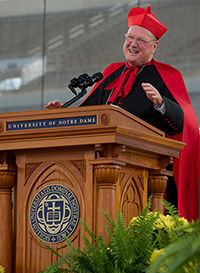 “You, the class of 2013, have sensed Mary’s maternal presence, ‘rising, sizing and sympathizing’ these blessed years on a campus wrapped in her mantle, and as you praise God that Father Sorin and that pioneer band of priests and brothers of the Congregation of the Holy Cross placed this most noble endeavor under her patronage from day one 171 years ago. So may I propose to you, my new classmates, that she’s not just our patroness; she’s our model.”

Dolan urged graduates to consider their experiences in a fuller light: “Here our goal is not just a career, but a call; not just a degree, but discipleship; not just what we’ve gotten, but what we’re giving; not just the now, but eternity; not just the ‘I,’ but the ‘we’; not just the grades, but the gospel."

Mallory Meter, a psychology major from Beverly Hills, Mich., delivered the valedictory address. (Watch Video / Read Address) Stressing the importance of living “every single day fully aware, present, and conscious and to never stop searching for the beauty in the present moment,” Meter said she recognized that “…this ability is one that few people ever achieve and if they do, it is often too late. This lack of awareness is why the phrase ‘you don’t know what you got ’til it’s gone’ seems to be a truism of the human condition. It is why 30 years ago will always be the good old days, and it is why that intangible pin-prick we call nostalgia is so often accompanied by a sense of sadness. But what if we could learn at our young age to live with a constant awareness of the beauty in the world and in our lives? What if we could realize that these days are the good old days, and what if we could appreciate what we have while it’s still in our grasp? 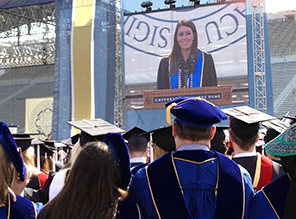 “This place taught us to think critically, to reason, to evaluate, to debate, to question, and to create, and these are the tools it takes to avoid living unconsciously, prodded along by nothing but outside pressures and expectations. The things we have learned here can force us to see the beauty in the mundane and to appreciate and value the present. If we can use these tools Notre Dame has given us, I truly believe we can make the world a better place.”

“May you be surprised by joy as you undertake your life’s work,” Father McCarthy told the graduates. (Watch Video / Read Address) “May you go beyond your comfort zone to help those in need. May you be blessed with faithful companions for your journey. May those in need become your friends. As we say with them, you see, whenever we are happy together, Jesus is with us.” 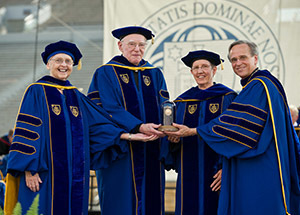 SPRED’s ministry began in 1960, when Father McCarthy, a priest of the Archdiocese of Chicago, began working with parents, special educators and catechist volunteers of several archdiocesan parishes to make Catholic liturgies and catechesis more accessible to children and adult parishioners with developmental disabilities. Sister Harrington, a member of the Society of Helpers, joined him in 1963 to help with catechetical and administrative work, and Sister Gallagher, a member of the Sisters of Providence, joined them in 1967, assisting both with administration and the training of new special catechists.

Energized by the renewed emphasis on catechesis in the wake of the Second Vatican Council, SPRED’s ministry expanded beyond Chicago in the 1960s and now the 52-year-old network administers faith formation and sacramental initiation programs for people with special needs in 28 Catholic dioceses and 200 parishes nationwide (including in Notre Dame’s own diocese of Fort Wayne/South Bend) as well as small faith groups in several other countries including England, Ireland, Scotland, Australia, South Africa, Malta and Mexico.