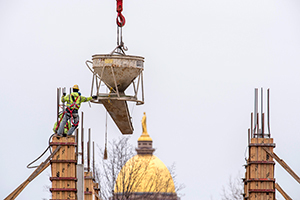 “Nothing says economic impact like construction cranes,” Rev. John I. Jenkins, C.S.C., Notre Dame’s president, told a gathering of 250 community leaders over breakfast this morning at the University’s Morris Inn. “It also tells you something about our confidence in the future.”

“Notre Dame is doubling-down on South Bend, on Mishawaka, on Elkhart, on Indiana, and on the unsurpassed promise of higher education done well,” Father Jenkins added.

The University’s annual economic impact in St. Joseph County alone was $1.302 billion for fiscal 2014, an increase of 11.6 percent compared to when it was last measured in 2012.

Combining the University’s spending on payroll, purchasing and construction with student and visitor spending — and adding a standard multiplier effect — the University accounts for a total of 14,650 jobs in St. Joseph County.

From testing new turbine engines in a new laboratory rising on the grounds where giant Studebaker factory plants once stood, to giving area students new skills and confidence through a Shakespeare performance program, an economic partnership between the University and its surrounding community is helping both grow and flourish together.

The University’s fourth Economic Impact Report, again produced through an analysis by New York-based economic development consultant Appleseed, found that the growing collaboration between the University and the community has led to an increase of jobs, economic activity, entrepreneurial energy and quality of life in the region. The report serves as a valuable tool to mark past achievements and inspire future cooperation.

The latest study notes that Notre Dame draws the majority of its revenues from all over the nation and world, yet does a significant amount of its spending locally on salaries, benefits, purchasing and construction. The study was commissioned by Notre Dame and based on data from the University, Visit South Bend Mishawaka and other sources for the fiscal year 2014, when Notre Dame’s payroll alone amounted to $458 million.

Notre Dame remains the largest employer in the county, with 5,713 full- and part-time employees, excluding student and temporary workers. About two and a half million visitors each year make its campus one of the strongest tourist attractions in Indiana. For example, each home football weekend generates about $18.5 million for the local economy.

Over the seven years leading to the fall of 2013, Notre Dame added 823 jobs despite a downturn in the national economy. Besides its direct employment, the University accounts for 8,937 other jobs in the county through its spending on construction, goods and services, its employees’ spending, and by bringing thousands of students and millions of visitors to the region’s hotels, stores and restaurants.

Appleseed’s previous report found the economic impact of Notre Dame in 2012 to be $1.167 billion in St. Joseph County. Steady increases in employment, construction, research and student spending drove much of the 11.6 percent growth over the last two years.

Among the report’s findings for fiscal year 2014, the University:

The full report is available at impact.nd.edu.