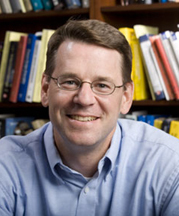 Researchers at the University of Notre Dame have a proven track record in energy related research, but with the creation of the Notre Dame Energy Center in 2005, they joined the many other institutions actively pursuing clean energy technologies. What is unique about one of the most current projects is that it evolved from unrelated researchcreating a domino effect.

Edward J. Maginn, professor of chemical and biomolecular engineering, and a team of faculty and students had been working to make environmentally friendly solvents using ionic liquids (ILs). ILs are a relatively new class of chemicals with diverse properties. In addition to being liquid at room temperature, many ILs have low combustibility, provide exceptional thermal stability and work well as solvents for diverse compounds.

What the team found during their experiments was that the carbon dioxide (CO2) they were using kept dissolving in the ionic liquid.

We didnt expect the carbon dioxide to be so soluble,Maginn said in an interview for the articleMaking Dirty Coal Plants Cleaner,which appeared in the July 13 issue of the journal Science.It sounds trite, I know, but one of the exciting things about research is how pursuing one activity can shed light on another, opening totally new avenues of possibility.

This is particularly important because emissions from the coal-fired plants (approximately 2,100 in the world) are responsible for close to a third of the greenhouse gases caused by humanity. In the United States alone, the gases some 600 plants produce surpass the amount generated by cars and all other industries combined. Regardless of its country of origin, CO2 concentrations in the atmosphere have increased since the onset of industrialization. Today levels are at approximately 380 parts per million, a number thats expected to rise to 500 or more parts per million by 2050. Is it any wonder that finding a way to curb these carbon emissions is a popular idea?

According to Maginn, there are basically three approaches to capturing CO2 in flue gas:pre-combustion capture, post-combustion capture, and oxy-firing. Maginn and the team are concentrating on post-combustion activities, which apply to the vast majority of existing power plants in the world. In fact, they have established a cooperative research and development agreement to develop novel technology and commercially focused approaches to CO2 capture and separation and are working with DTE Energy, Detroit, Mich.; Babcock and Wilcox, Baberton, Ohio; EMD Chemicals, Inc., Gibbstown, New Jersey; Trimeric, Buda, Texas; Air Products, Allentown, Pa.; and the National Energy Technology Laboratory, Pittsburgh, Pa.

To date they have identified more than 20 new ILs that dissolve CO2. They have also have designed new ILs with enhanced CO2 solubility and developed advanced molecular modeling capabilities to make quantitative predictions of IL properties based only on chemical structure.

More information on capturing CO2 and other activities in the Notre Dame Energy Center can be found at http://energycenter.nd.edu/ .