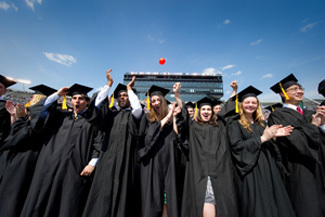 Urging the class of 2011 to continue the University of Notre Dame’s rich tradition and strong commitment to public service, United States Secretary of Defense Robert Gates reminded graduating seniors that the nation’s problems require the active involvement of our best and most honest citizens.

Gates was the principal speaker and recipient of an honorary doctor of laws degree at Notre Dame’s 166th University Commencement Ceremony held Sunday (May 22) in Notre Dame Stadium.

“It is the task of all of this year’s graduates to continue this university’s tradition of public-mindedness," Gates said in his Commencement address. "Most of you have already participated in service projects while here at Notre Dame. Volunteering for a good cause is important, there is no doubt about that. And as you graduate today, I encourage you to discover for yourself what it is that drives you, what course or career path engages your head and your heart and your passion, and then pursue it with all your energy and commitment. But I also want to ask you to consider taking an active role in the life of this country by committing yourself to spending at least part of your life in public service.” 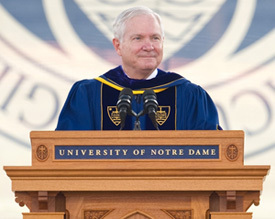 While lauding our nation’s historical successes against both domestic and international threats, Gates stressed that the problems of our country and our world will not resolve themselves.

“Our national story has been, and still is, the envy of the world. Indeed, the death of Osama Bin Laden after a decade-long manhunt by the United States reminded us earlier this month that, as President Obama said, when faced with tough times ‘we do not falter.’ We don’t turn back. We pick ourselves up and we get on with the hard task of keeping our country strong and safe.

“Still, we cannot assume, because things have worked out in the past, that the problems we face will eventually resolve themselves. We need the active involvement of our best, most honest citizens, to make our democracy work – whether as candidates for public office, as civil servants, or as members of our armed forces.”

Finally, Gates reminded the graduating class that ensuring a peaceful and prosperous future for our nation requires both sacrifice and responsibility: “And no matter how many smart or talented individuals make up our government, in order to make progress in confronting our most pressing problems, we need leaders able to make tough choices and to work together.

“But throughout this process we should keep in mind historian Donald Kagan’s observation that the preservation of peace depends upon those states seeking that goal having both the preponderant power and the will to accept the burdens and responsibilities required to achieve it.”

Gates concluded by stating, “if America declines to lead in the world, others will not. So to the Notre Dame class of 2011, I would ask the wisest and most honest of you to find a way to serve and to lead our country to new greatness at home and around the globe.”

Stressing the power and impact that is unleashed when diverse groups of people form a community united by a common vision, Sister Scullion’s Laetare address urged the graduates to use their resources of faith and intellect to help end homelessness.

“As Catholics, we are a people of hope. And in our work at Project H.O.M.E., we dare to make the hopeful assertion that we can end homelessness. This hope is grounded in reality: the reality of concrete solutions that have proven themselves for many years; and the reality of a community of persons from all walks of life who come together with a common vision of justice and compassion.”

“With the education and the values you have experienced here, you can refuse to be blinded by the false values of excessive individualism and phony materialism. You must pave the way in reigniting the quest for the common good. As Joan often reminds us: ‘Strive to live a life you admire, rather than one you envy.’” 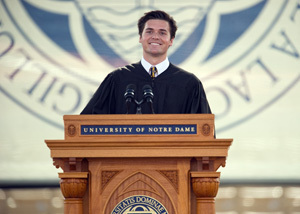 With the theme of “Do not strive to be first, but rather, be the first to strive,” Larkin challenged his classmates – as they enter the next phases of their lives – to take risks, “detour from the straight path,” and develop a new paradigm for their lives that redefines what it means to succeed.

“We know, on the precipice of entering a completely different phase in our lives, that we have excelled. We are accustomed to finding ourselves at the top; accustomed to getting judged by our relative rankings to others. We are defined by numbers – percentages, GPAs, standardized test scores. This has been the paradigm that has guided our quest for the last decade. We’ve done incredibly well. So what is the challenge for our generation?

“We now find ourselves at the end of our Notre Dame career, and we enter a world that values something very different. We enter a world in which true visionaries do not necessarily strive to be first. Oftentimes, they are the first to strive. There is no longer any first place in the world; no longer one ‘system’ to excel in.”

Larkin credited Notre Dame with providing the Class of 2011 with the foundation and preparation to step outside their safety zone.

“We have occupied a position at a cultural nexus for the past four years. And because of this, we are better prepared to be citizens of the world, to fight for what we believe, to embrace life to the fullest. We learn from Notre Dame the path less traveled is worth investigating, the examined life is really the one worth living. We’ve been exposed to so much here on these scenic quads that it would be hard not to find something that truly kindles us.

“At the end of the day, this is what it takes. This is what it takes for societies to thrive. It requires a lot of people deciding that risks are worth it; that working for the collective good is worth it; that challenging conventional wisdom is worth it. Greatness emerges when people engage the world of ideas and nurture their own rather than racing off to be the best.” 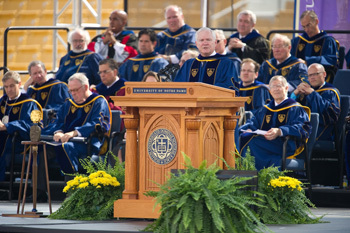