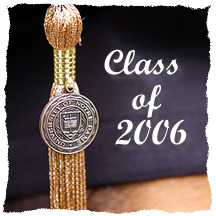 The University of Notre Dames 2006 graduating class can be defined collectively, through a variety of numerical and statistical observations, as well as individually, through the stories of seniors with compelling tales to tell.

Beyond the numbers, here are a few individual senior stories of distinction:

Katrina Gossett ,Indianapolis- A film, television and theatre major, Gossett has spinal muscular atrophy, a form of muscular dystrophy, but shes never let her circumstances limit her dreams.When Katrina was a freshmen, she immediately impressed me as a very bright student,said Scott Howland, director of the Office for Students with Disabilities.But what also impressed me was how well she managed and worked with the students who assisted her on a daily basis. She had a pool of about 15 students in her residence hall who assisted her with getting ready each day, and she has worked very hard to become independent.In addition to fellow students, other help has come from her dog,Duke,a Labrador-golden retriever who assists Gossett with opening doors, picking things up and providing still more independence. At Notre Dame, Gossett was actively involved with the Pasquerilla East Musical Company (PEMCO), starting with backstage work and moving to the main stage this year in the production ofFootlooseat Washington Hall.Ive really enjoyed my time here,Gossett said.A lot of the friends I met early have remained friends, and PEMCO has been a great experience.Gossett will next attend the University of Chicago School of Law, where she plans to specialize in disability law – to help others overcome circumstances to realize dreams.

_Gossett is available at kgossett@nd.edu _

Catherine Herman , Baldwin, N.Y. – The Universitys first recipient of the Simon Fellowship for Noble Purpose, Herman plans to use her $40,000 prize to start a community home for the elderly in New York City.Honored for demonstrating passion, dedication, a high capacity for self-direction, and originality in pursuit of a goal that will strengthen civil society, Herman plans to attend nursing school and eventually explore masters programs in geriatric nursing and pastoral counseling as part of her dream to help the elderly.She has served as a volunteer at Cardinal Nursing Home and Catholic Worker House inSouth Bend, spent the summer of 2004 working with mentally and physically disabled orphans at Casa Hogar San Pablo inQuerétaro,Mexico, and provided direct care aid for one of her classmates.Herman is a theology major and peace studies minor.

_Herman can be reached at cherman@nd.edu _

Katherine Malkovsky , Paris - For Malkovsky, thathometownline is more accurately read as the latest stop on what she describes asan incredible journey,one that will continue this fall at Sothebys in New York City. In 1998, before her freshman year of high school inWest Chester,Pa., her fathers job moved the family toLondon. While living inEngland, Malkovsky discovered a passion for art history, one that she sayshas just developed through osmosis, through being able to go to various museums and castles and seeing artifactsup close. Since coming to Notre Dame, her family has moved twice morefirst toTokyoand then to Parisand Malkovsky, who will graduate with a first major in English, has pursued her interest in art history through a supplementary major. As she explored job options, she was attracted by the reputations of famed auction houses Christies and Sothebys, but thought they wouldnt be interested in someone straight out of college. What Malkovsky did find were masters programs at both places, and, as it would turn out, two auction houses that wanted her to makeNew York Cityher newhome.She chose SothebysInstituteofArt, where she will be working toward a masters in art business. Where it will lead her, perhaps to work in a museum or start her own gallery, Malkovsky doesnt know, but shes excited to find out.The classroom is not so much at Sothebys but . . . is really taken from one building toNew York Cityat large.

Anna Nussbaum ,Colorado Springs- In response to controversial performances of “The Vagina Monologues” on campus in recent years, Nussbaum set out to create an alternative, a play that would address some of the same issues of female sexuality and empowerment, but also incorporate themes of particular interest to the Notre Dame community. “Unfortunately, ‘Monologues’ doesn’t address issues of faith,” recalls Nussbaum, whose play, “The Primrose Path,” was performed on campus in spring. “My play explores religion, men, marriage, and other topics as well.” A Program of Liberal Studies major, Nussbaum wrote “The Primrose Path” as a summer UROP (Undergraduate Research Opportunity Program) project through the Institute for Scholarship in the Liberal Arts in theCollegeofArtsand Letters. “Playwriting is something I never would have had the courage to try unless I had that kind of structure and academic support,” she says of the experience. After graduation, Nussbaum will head toNew York Cityto work as an editorial assistant for Commonweal. She plans to continue writing and hopes to have “The Primrose Path” published.

_Nussbaum can be reached at nussbaum.8@nd.edu _

A.J. Remen, San Diego- An architecture major, Remen began working in the field while in high school as a way to help a close family friend. When Marshall Neu died in 2000, his widow, Jean, and son, Jason, faced a considerable challenge. Jason had suffered a stroke the day he was born and the resulting neurological damage has left him unable to care for himself. Marshall Neus death left Jean with the prospect of caring for her then-29-year-old son alone. Her longtime friends, Anne and Alan Remen, stood by her side and provided Jean with advice as she looked for a new home, and A.J., then a senior and an aspiring architect, offered to use his drafting skills to redesign the house to make it easier for Jason to help himself, and for Jean to help him. He drew up the plans – featuring wider hallways, ramps and other features to accommodate Jasons wheelchair – and, with considerable free assistance from a professional architect, contractors, tradespeople and merchants, work was completed on the project soon after A.J. left forSouth Bendto attend Notre Dame in August 2001. Since age 7, A.J. had dreamed of attending Notre Dame and becoming an architect. The dream has come true. He has completed the Universitys five-year architecture program, with an emphasis onnew urbanism- the modern movement to reduce suburban sprawl through the design of more traditional cities and neighborhoods – and will begin work this summer for the architecture firm Opticos in the new urban community of Seaside, Fla. But first comes commencement, and among those in attendance to celebrate A.J.s achievement will be Jean Neu, who is leaving Jason in the extended care of others for the first time in order to travel fromSan DiegotoSouth Bend.

_Remen can be reached at aremen@nd.edu _

Tom Thornton , Middleboro, Mass. – A 6-foot-6 pitcher for Notre Dames nationally ranked baseball team, Thornton adds new meaning to the baseball expressionbringing heat.Sure, Thornton has an outstanding fastball – as well as off-speed pitches and good control – that make him a top professional prospect. But its in his scholarly work that the term truly comes to light – pun intended. An anthropology major, Thornton is interested in conducting research into the early use of fire, particularly in Africa. In fact, he plans to serve in an internship this fall with the National Museum of Kenya, where he will investigate the subject. The trip to Kenya will have to wait until fall because Thornton almost certainly will be selected in the professional baseball draft in June and then play minor league ball during the summer. In addition to his work on the baseball field and in his field of study, Thornton has excelled in the classroom and community, and he was honored earlier this month with two major student-athlete awards – the Byron V. Kanaley Award, the most prestigious honor presented to Irish athletes for outstanding leadership on and off the field, and the Christopher Zorich Award, for volunteer service to the University and the South Bend community.

_Thornton can be reached at tthornto@nd.edu
_ __