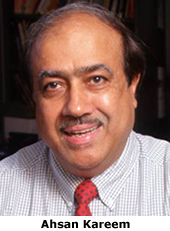 Ahsan Kareem, Robert M. Moran Professor of Civil Engineering and Geological Sciences and director of the NatHaz Modeling Laboratory at the University of Notre Dame, has been appointed advisory professor atTongjiUniversityinShanghai. It is one of only four such appointments in the long history of the civil engineering program in Tongji, which is rated number one in the field inChinaand which houses affiliated research centers and state laboratories.

Kareems work, which relates to research efforts at the university focusing on wind effects on civil infrastructurespecifically the mitigation of natural hazards and the development of tall buildings and long-span bridgessupports the Chinese governments commitment to advance the nation by encouraging international collaborations, exchange programs and growth in science and technology.

Kareem specializes in probabilistic structural dynamics, fluid-structure interactions, structural safety and mitigation of natural hazards. Focusing on the environmental loads of wind, waves and earthquakes on structures, he uses computer models and laboratory and full-scale experiments to understand and predict the impact of natural hazards on the constructed environment.

In addition to this most recent honor, Kareem received the Robert H. Scanlan Medal for outstanding original contributions to the study of wind-load effects on structural design in 2005 and the Jack E. Cermak Medal in recognition of his contributions to the study of wind effects on structures in 2002. He also was named the winner of the 1997 Engineering Award by the National Hurricane Conference for his efforts in developing the ASCE7-95 Standard for Minimum Design Loads for Buildings and Other Structures to reduce hurricane-spawned damage and the 1984 Presidential Young Investigator Award from the National Science Foundation.

Kareem was graduated with distinction from the West Pakistan University of Engineering and Technology in 1968 and, through a joint program with the Massachusetts Institute of Technology, he received his masters degree in structural engineering from theUniversityofHawaiiin 1975. He received his doctorate in civil engineering with an emphasis on structural and fluid dynamics fromColoradoStateUniversityin 1978. He has been a member of the Notre Dame faculty since 1990.