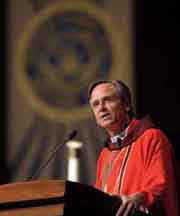 University of Notre Dame President Rev. John I. Jenkins, C.S.C., opened the academic year Tuesday (Aug. 26) by wishing that students, faculty and staffbe afflicted by hopeandthe courage and conviction to act when action is called for and to inspire others to act as well.

As is the University tradition, the president delivered his thoughts during his homily at the academic year Opening Mass in the Joyce Center, an all-community celebration that presented the full beauty of the Universitys liturgical choirs and symphony with the presence of dozens of concelebrating Holy Cross priests resplendent in red vestments.

Father Jenkinshomily set the stage for the upcoming Notre Dame Forum to be held Sept. 24 (Wednesday) that will assemble leading intellectuals, government and business representatives for a broad-ranging discussion on sustainable energy. Details are available on the Web at http://forum.nd.edu .

Multiple academic and administrative units have signaled that 2008 will solidify a permanent, enduring commitment to sustainability on fronts ranging from food to the disposal of refuse and from energy conservation to contemplating the future of the Earth in a Catholic context.

The present and the future holda worrisome listof issues, advised Father Jenkins, citing the high price of gas, environmental degradation of land and sea, depletion of natural resources, the impact biofuels have had on poverty and starvation, and the strife and political instability that scarce resources cause.

In answering the questionWhat should our response be?, Father Jenkins cautioned against both optimismthe conviction that whatever challenges appear, the situation is not so graveand pessimisma mindset that believes problems are grave and insolvable.

Both excuse one from serious thought, analysis and, ultimately, from action,he said.

Hope, in contrast,demands that we see the world as it is, that we assess, seek to understand, argue, seek solutions, overcome frustrations and failure. Most importantly, it encourages the courage and commitment of common action,he said.

Provost Thomas G. Burish traditionally closes the Mass with a few words; this years he pointedly addressed to first-year students.

Reflect, he counseled, on what is right, what is Gods will, on what your conscience demands.

You may never have a better time in your life to develop a mature understanding of right and wrong than you do as a student at Notre Dame,he said.