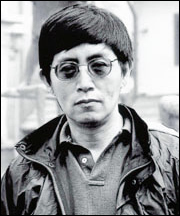 Bei Dao, exiled Chinese poet and democratic activist, will present a poetry reading at4:30 p.m.March 16 (Wednesday) in the Eck VisitorsCenter at the University of Notre Dame.

Accused of helping incite the 1989 student revolt in Tiananmen Square, Bei Dao has lived in exile in theUnited Statessince then.He is among the first generation of poets in the Peoples Republic ofChinato free themselves of the orthodoxy of state-controlled literature and is a leading member ofChinasmistyschool of poetry, a movement using free verse that emerged in the 1970s.

Bei Dao is the author of several books of poetry, short stories and essays.In 1978, he and a colleague founded the underground literary magazineJintian,which ceased publication under police order. The journal was revived in 1990, and Bei Dao serves as editor-in-chief.

Nominated several times for the Nobel Prize in Literature, Bei Daos awards include the Aragana Poetry Prize from the International Festival of Poetry, and a Guggenheim Fellowship.He is an honorary member of theAmericanAcademyof Arts and Letters, and currently is the Louis Wilson Mackey45 Poet in Residence atBeloitCollege.