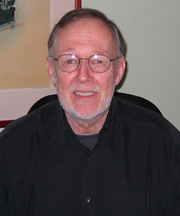 If, as is said, you cant judge a book by its cover, then you probably dont want to draw conclusions aboutBig Breasts and Wide Hips,a novel recently translated from Chinese by Howard Goldblatt, research professor in the Department of East Asian Languages and Literatures at Notre Dame.

The novel, Goldblatt says, is a sweeping historical piece with touches of fantasy by one ofChinas most renowned authors, Mo Yan. Goldblatts translation ofMy Life as Emperor,by Su Tong, also has been recently published.

If youre going to read an English translation of a Chinese novel, youre probably going to read one translated by Goldblatt. The field, says one ofAmericas best-known noveliststwo-time Pulitzer Prize winner John Updike, in a New Yorker review of the two novelsis Goldblattslonely province.

Lonely or not, it is certainly a busy province. Goldblatt came to Notre Dame from theUniversityofColoradoin 2002 with his wife, Sylvia Lin, an assistant professor of Chinese. His opportunities for translating literature are so ample, he accepts only part-time teaching and administrative duties on campus.

Chinese fiction has not developed the cachet enjoyed in theU.S.by such writers as Gabriel Garcia Márquez. Goldblatt says he wonders if Americans arent naturally suspicious of literature that has been translated, as though they think it has been sanitized, rendered somehow inauthentic.

Its a loss, Goldblatt believes, becauseyou can learn best aboutChinafrom the Chinese.

You can learn about the breadth and depth of a country from one person, if that person is a writer or a poet,he says.Theres something about a writer who participates in events, that intuits what defines these events, then expresses it.

Goldblatt became the premier Chinese-to-English translator with episodic flair worthy of some of the characters he has brought to life. A less-than-stellar college student and less-than-ambitious young adult at the height of the Vietnam War, Goldblatt enlisted in the Navys officer training school. The time he spent stationed inTaiwan, where he learned Chinese, led him to graduate study.

He earned his doctorate in Chinese fromIndianaUniversity, where the hours he spent translating texts for his dissertation led him to believe that someday this might be a way to make a living. His translation of an earlier Mo Yan book,Red Sorghum,became popular as a novel and, later, an internationally regarded movie.

Goldblatts translations are, he insists, faithful to the written text; there is an art involved in creating the essence of the authors intent in a way that can be experienced in English. Updike called Goldblatts challengemidwifery.Goldblatt describes a process of mixing words, syntax and idioms while remaining true to the authors design. —

Goldblatt also negotiates on the authors behalf with publishers, who sometimes suggest cuts and other changes they think would make the books more accessible to Western readers.Its the authors call,he insists, but he does not shy away from recommending editorial cuts, since novels are virtually never edited for style or story in China.

His status in the field is never more apparent than when he discovers a bootlegged copy of one of his books in a third languageHebrew, Portuguese or Slovenian, for example. When his cuts, his idioms and even occasional mistakes are replicated, Goldblatt knows hes seen piracy.

Its editors and contributors are among the invitees to the conference on campus March 19 and 20, titledCrisis and Detour: 25 Years of Today , which will gather expatriate and exiled Chinese authors and the international scholars who have toiled to bring translations and interpretation of those works to the rest of the world.