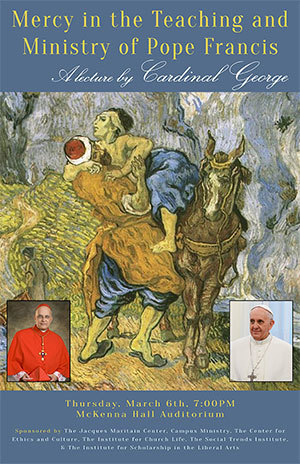 Cardinal Francis George, O.M.I., archbishop of Chicago, will speak on “Mercy in the Teaching and Ministry of Pope Francis” at 7 p.m. Thursday (March 6) in the McKenna Hall Auditorium on the campus of the University of Notre Dame.

Cardinal George, who has served as archbishop of Chicago since 1997, was a member of the conclaves that elected Pope Benedict XVI in 2005 and Pope Francis last March.

As archbishop of Chicago, Cardinal George has written pastoral letters on evangelization and racism. He also is the author of several books, including “The Difference God Makes: A Catholic Vision of Faith, Communion, and Culture,” and, most recently, “God in Action: How Faith in God Can Address the Challenges of the World.”

“In many quarters, Pope Francis seems to have shaken up the business-as-usual appearance of the Church by his constant emphasis upon the mercy of Christ,” said John O’Callaghan, director of Notre Dame’s Jacques Maritain Center, a principal sponsor of the event.

“This new emphasis is a welcome development to some and a matter of concern to others,” O’Callaghan said, “but is it really a shake-up? What is mercy in the eyes of Christ, expressed in the life of the Church? Is this a shift of emphasis? Is it a change of teaching? Or is it a call to recollect the central mystery of Catholic Christian faith? Do we yet understand what Francis is calling us to? Should we be surprised by the papacy of Francis?”

The lecture, which is free and open to the public, will be followed by a reception.