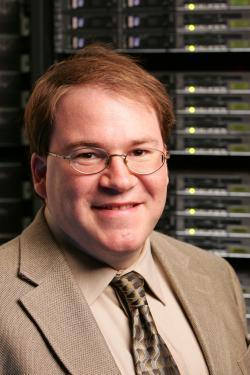 Steven A. Corcelli, assistant professor of chemistry and biochemistry at the University of Notre Dame, has been selected as a 2009 Alfred P. Sloan Research Fellow.

The Sloan Foundation selected 118 outstanding early career scientists, mathematicians and economists at 61 colleges and universities in the United States and Canada.

The two-year, $50,000 award goes to faculty who are conducting research at the frontiers of physics, chemistry, computational and evolutionary molecular biology, computer science, economics, mathematics and neuroscience.

Corcelli, who joined the Notre Dame faculty in 2005, also was recently named a recipient of a National Science Foundation CAREER Award, the highest honor given by the U.S. government to young faculty in engineering and science.

Corcelli is an expert in charge transfer reactions occurring in confined aqueous environments. His current research interests include the dynamics of water at DNA interfaces, infrared probes of biomolecular environment and structure, computer simulations of metal-oxide interfaces and nonadiabatic transition path sampling.

Prior to joining the Notre Dame faculty, Corcelli was a postdoctoral researcher at the University of Wisconsin where he worked on spectral diffusion and vibrational echo correlation spectroscopy.

Sloan fellowships have been awarded since 1955, initially in only threes scientific fields: physics, chemistry and mathematics. Since then, 38 Sloan Research Fellows have gone on to win the Nobel Prize in their fields. Another 14 have received the Fields Medal, the top honor in mathematics. Although Sloan fellowships in economics only began in 1983, Sloan fellows have subsequently accounted for eight of the 13 winners of the John Bates Clark Medal, generally considered the top honor for young economists.