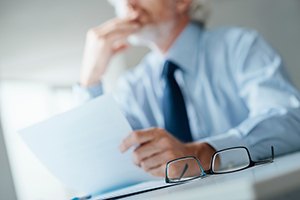 Feeling anxious in your job? You may be surprised to learn that you have company in the form of CEOs. A new study by researchers Michael Mannor, Adam Wowak, Viva Bartkus and Luis Gomez-Mejia from the University of Notre Dame’s Mendoza College of Business finds that CEOs experience job anxiety as much or more than others, and such anxiety has powerful influences on their judgment and strategic decision-making.

Mannor and Bartkus traveled widely across the country to meet with CEOs of large firms and ask them about two of the most complex decisions they have had to make in their role. They ended up spending time with more than 100 business leaders, who led firms that averaged over 35,000 employees across a wide range of industries.

“At the end of each of our structured interviews, we then asked each leader if they could help us make two key connections,” Mannor said. "First, we asked if they could connect us with the people on their decision-making teams, so that we could study their decision processes in more detail from diverse perspectives. Second, we asked if they could connect us with their spouse or close friends and family, which allowed us to get an objective perspective on each CEO’s job anxiety. From this base of data, which allowed us to triangulate between the perspectives of the CEO, their team, and their close friends and family, we were able to draw new and more rigorous insights that have not been possible before in prior research.”

Mannor, Wowak, Bartkus and Gomez-Mejia found that when CEOs feel more anxious and are in a tough situation, they are more likely to surround themselves with loyalists. In terms of risk taking, they found both a main effect — anxiety drives less risk — and an interaction: anxiety during tough situations leads to even lower risk taking.

“Ignoring such anxiety by assuming that top executives have things all under control is simply naïve: CEOs are human and subject to the same types of fears, emotions and biases as everyone else,” Mannor said.

Although the researchers were mostly interested in the question of how job anxiety influences firm strategy and strategic decision-making, they were able to gain some insights into what type of CEO struggles more with job anxiety than others.

“First of all, we were surprised to find that CEOs of large firms vary much more widely in their experience of job anxiety than we thought we would see going into this work,” Mannor said. “Although none of the CEOs we met with showed the levels of anxiety that would require immediate clinical intervention, they did range from extremely low levels of anxiety to levels that would be considered quite high in any population. Society tends to lionize CEOs as unflappable captains of industry that have it all figured out, but what we found was a group of high achievers that experienced the stress of their work as much or more than anyone else.

“Executives who felt that their markets were more turbulent felt more anxiety, as did those who were leading their firms during the financial crisis of 2008,” Mannor said. “However, we also found that women experienced more job anxiety than men, though they were only about 10 percent of our sample, and leaders who were rated as more humble were also viewed to be less anxious.”

Mannor, Wowak, Bartkus and Gomez-Mejia found some interesting influences that job anxiety had on strategic decision-making.

“We theorized that when leaders were more anxious, they would tend to engage in more self-protective processes in an attempt to insulate themselves from scrutiny and blame,” Mannor said. “We found support for our hypotheses in several ways. First, when facing tough situations, more anxious leaders tended to surround themselves with close friends and loyalists rather than others who might have been better qualified or stronger leaders. Second, we found that job anxiety also had strong influences on risk-taking. When CEOs were more anxious, they simply took fewer risks, even though smart risks have been shown to be essential to growth for organizations. This effect on risk was even stronger when the organization was struggling.”

Although the researchers didn’t focus specifically on solutions to the dilemma of job anxiety impacting strategic decision-making, they do suggest some strategies that could be helpful.

“For example, when a board of directors appoints a CEO, rather than assume that they will always make level-headed decisions the board might take steps to provide social support but also accountability,” Mannor said. An excellent strategy for boards is to force the CEO to rigorously present multiple options to the board when considering a big strategic decision, rather than the CEO’s final solution, as this might make their avoidance of smart risks more transparent.

“Another step boards might take is to regularly review the CEO’s appointments of people into other top positions, to again create a culture of transparency where it would be more difficult for the CEO to surround themselves with loyalists instead of strong leaders. Finally, if you find yourself reporting to an anxious CEO, it would be helpful to keep this in mind when presenting ideas and solutions. Recognizing their tendency to engage in self-protection and avoid risks, you might find ways to draw more attention to risk mitigation in your presentation or go to greater lengths to highlight the upside potential of a proposed strategic recommendation.”

The study appears in the Strategic Management Journal and can be found here: http://onlinelibrary.wiley.com/doi/10.1002/smj.2425/abstract.