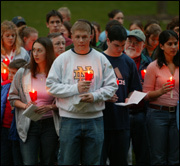 On the Saturday night following the first full moon after the vernal equinox, a great fire will be burning on the South Quad of the Notre Dame campus. A crowd will gather around the fire to pray that God will make it holy. A large candle will be lit from its flames and carried into the vestibule of the darkened Basilica of the Sacred Heart. Father David Tyson, the provincial superior of Holy Cross, will carve a cross into the beeswax, and then the first and last letters of the Greek alphabet, and then the numerals 2,0,0, and 4. As he does so, he will remind all who are present that Christ, the Alpha and the Omega, is the beginning and the end, and that all the ages—past, present and future— belong to Him.p. As this newly carved Easter Candle is carried to the altar of the Basilica, smaller candles will be lit from its holy fire and passed among the congregation until the Basilica is awash with candlelight, and then the Exsultet, the ancient Easter Proclamation will be sung, concluding with the prayer, “May the Morning Star which never sets find this flame still burning: Christ, that Morning Star, who came back from the dead, and shed his peaceful light on all mankind, your Son who lives and reigns forever.”p. The celebration of the Lord’s Resurrection will have begun at Notre Dame.p. The liturgical celebrations of the Church are arranged around the Easter Vigil as advertently as the life of every Christian must be arranged around the risen Christ. At Notre Dame, the vigil crowns a series of Holy Week liturgical events, beginning with a Tuesday night Stations of the Cross service at 7 p.m. From the Grotto, participants march in a candlelight procession through 14 sites around the campus, commemorating at each an aspect of the suffering and death of Jesus. The Stations end in the Basilica, where the Cross is venerated and the Sacrament of Reconciliation is available.p. On Holy Thursday at 5 p.m., the Mass of the Lord’s Supper is celebrated in the Basilica, with all of the priests in the Notre Dame community invited to concelebrate. This liturgy includes the ceremonial washing of the feet, commemorating the example of service given by Jesus in the 13th chapter of John’s Gospel. At the conclusion of the Mass, the Blessed Sacrament is carried through the Basilica in procession as the congregation sings “Pange, Lingua,” the 13th-century hymn written by St. Thomas Aquinas to honor Christ’s Eucharistic presence.p. At 11 p.m., the service of Tenebrae, the Latin word for “darkness,” is held in the Basilica. During Tenebrae, the congregation sings psalms and listens to the Lamentations of Jeremiah as a cluster of candles is extinguished one-by-one and the last carried outside until the Basilica is plunged into a darkness which signifies the death of Jesus. Participants then pound books and fists against the Basilica pews, simulating an earthquake, until the last candle is carried back into the Basilica, anticipating the lighting of the Easter Candle.p. The Basilica opens on Good Friday at noon for silent prayer and the celebration of the Lord’s Passion at 3 p.m. According to ancient tradition, there is no liturgy of the Eucharist during this celebration, but Scriptures are read, the Cross is venerated and Communion is distributed. At 7:15 p.m., a Stations of the Cross service is held.p. From the rising of the sun to its setting, the celebrations of Holy Week emphasize that the whole world is being transformed and renewed by the Resurrection and that, all time belonging to God, there is no better time than here and now. Rev. Charles O’Donnell, C.S.C., Notre Dame’s poet/president remembered the great promise of Easter in a poem he wrote early in the last century*:p.

Thus may the winds our ashes take,

{mso-tab-count: 2} When God’s eye hath burnt up the worlds,

This flesh shall stand with Him. {mso-spacerun: yes}

p. An awesome, if joyous, destiny to celebrate, at Notre Dame, or anywhere.