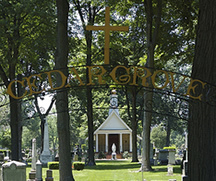 The team of Notre Dame administrators and Holy Cross priests who have brought a new chapter of expansion to Cedar Grove Cemetery on campus are pleased that the projects nameComing Homeso delightfully fits the stories of the people this new enterprise will serve.

But for the almost five years it has taken to bring the mausoleum project to fruition, an alternate name might as well beHappy Endings.

Now visibly under construction as one passes Cedar Grove onHoly Cross Drive, the Coming Home mausoleum will offer burial sites for up to 1,400 beginning this summer. While faculty and staff have been able to purchase burial sites in the traditional cemetery, and will be offered space in the mausoleum, the project will provide campus burials for alumni for the first time. Qualifying members of Sacred Heart Parish also will be included.

About 1,000 alums already have expressed interest in signing on to the new facility.

Alumni have been requesting campus burials for as long as Alumni Association Director Chuck Lennon can remember. For 25 years, he says,Id get about a call a month, inquiring about Cedar Grove.

Father Seetch, former alumni chaplain, supported the project in ways both passionate and pastoral. In a pastoral letter he wrote for a 2001 alumni newsletter, he told the story of how he, his sister and some cousins meet at their mothersClevelandgrave site every Mothers Day to commemorate her passing. They call the eventThe Orphans Brunch,and Father Seetch recommended that family meetings to reminisce about loved ones could be both personally and spiritually beneficial.

But as was becoming clear to Father Seetch and to Lennon, the modern world has made family gatherings very difficult. Many alumni told Lennon their best success was assembling on campus annually for a football game.

Space limitations made a solution difficult. Cedar Grove was expanded in 1995 when the Notre Dame Golf Course was cut back from 18 to nine holes. But the facility remained too small to handle alumni demand, noted Father Warner, director of the Office of Campus Ministry, where the interment process for the new facility is being developed.

In recent years, some 40 percent of burials in Cedar Grove have involved cremated remains, Father Warner says. So a mausoleum that accommodates both crypts for full-body burial and niches for cremated remains emerged as a viable solution. The new facility will include both, as well as niches for couples who would like to be buried together.

Shortly before Christmas, as construction began,CedarGroveCemeterys Web site launched a link to theComing Homeprogram. Some logistics, such as pricing, still are being examined. Such determinations will be posted on the Web site as they are made.

Harr has been the point person for many of the projects planning issues. His efforts have been greatly aided by representatives of the Archdiocese of Chicago, which operates, Harr says, the largest group of Catholic cemeteries in the world.They really have been our advisors,he says.

Harr says he and the oversight committee have found the planning process to be a spiritual learning experience.When I started this, I didnt fully understand the whole process of burying the dead, especially as it relates to the Catholic faith,he said.