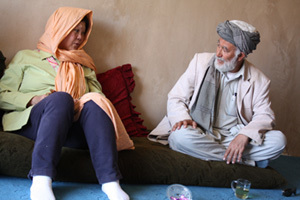 As the new school year started, Carolyn Y. Woo had logged more than 62,000 air travel miles during the summer. That’s four major continents – with repeat visits to several – in less than 100 days.

From Uganda to Shanghai, New York, Hong Kong and Australia, the Martin J. Gillen Dean of Notre Dame’s Mendoza College of Business talked with more than a dozen business and alumni groups about a topic she finds increasingly urgent in shaping the global marketplace: business ethics and corporate social responsibility.

“When we see the recent cases of corporate misconduct, we can easily agree that ethics and values are sorely needed as foundational leadership principles,” Woo said. “But there’s a bigger picture here, too, that goes beyond business ethics as the answer to irresponsible behavior. On the global level, business can be a force for good in solving society’s problems, such as poverty, violence and disease. This is the conversation that should be taking place in classrooms, boardrooms, C-suites and government offices.”

Woo, who has traveled extensively to some of the world’s most troublesome hot spots, including Afghanistan and Pakistan, often works with the United Nations and other NGOs, such as the nonprofit Catholic Relief Services, to study and work with groups involved with social responsibility efforts.

During her visit to Uganda in June, Woo conducted a needs-assessment workshop for a group of 40 African bishops and religious leaders from 10 countries of Eastern Africa; namely, Eritrea, Ethiopia, Kenya, Malawi, Sudan, Tanzania, Uganda, Zambia, Rwanda and Burundi. The workshop, sponsored by the U.S. Conference of Catholic Bishops (USCCB), was intended to help these leaders develop human and resource capacity in an effort to meet the increasingly complex demands of their congregations as they faced HIV/AIDS, violence and the rise of radical Islam. 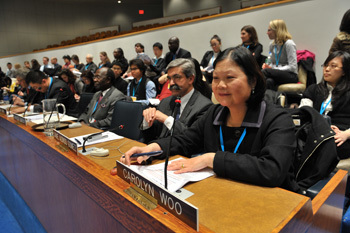 On June 21 and 22, Woo served on the Blue Ribbon Panel convened by Junior Achievement and public accountancy and consulting firm Deloitte relating to ethics curriculum for JA participants. On June 24, she spoke as a panelist on the plenary panel of the United Nations Global Compact Leaders Summit 2010 convened by U.N. Secretary-General Ban Ki-moon. The U.N. Global Compact is a principles-based initiative that encourages businesses worldwide to adopt sustainable and socially responsible policies.

Woo represented AACSB International in the startup of the Global Compact’s academic counterpart – Principles for Responsible Management Education (PRME), which provides a framework for academic institutions to advance the broader cause of corporate social responsibility and incorporate universal values into curricula and research. The Mendoza College was one of the first signatories for the initiative, which was unveiled during the U.N. Global Compact Leaders Summit in July 2007. As the only representative from higher education on the plenary panel, Woo called for businesses to use their influence in bringing about needed changes in business curricula through their various roles as advisory board members, recruiters and benefactors of business schools.

In July, from the Rockies to the Yangtze, Woo appeared before groups of business education leaders. She chaired the sustainability workshop for deans and faculty members sponsored by the AACSB International, the global accreditation body for business schools. Days later, Woo arrived in Shanghai to address the deans of Chinese business schools on innovation in curriculum pertaining to ethics and corporate social responsibility. In Hong Kong, Woo’s itinerary included a talk to the business leaders associated with the American Chamber of Commerce about the varying perspectives of business ethics in the West and in China. At the end of her journey, she visited the Sydney, Fremantle and Broome campuses of the University of Notre Dame Australia in her capacity as a governor of the university. At Broome, a site established for the education of Aborigines, Woo offered the commencement speech citing her own experience in imagining and seeking a future different from the Chinese women of her generation.

Woo strongly believes that business is not a necessary evil, but a necessary good. However, to achieve its potential, business depends on the integrity and moral energies of its leaders. As so much is at stake, she sees this work as a privilege for the impact it can have.

Woo assumed the deanship of the Mendoza College of Business in 1997. During her tenure, the Mendoza College achieved the No. 1 national ranking for its undergraduate programs and 20th place rankings for its MBA and EMBA programs (Bloomberg BusinessWeek), and a 6th place ranking for the EMBA program (Wall Street Journal), as well as top rankings in Business Ethics (Financial Times, Bloomberg BusinessWeek) and Accountancy (Bloomberg BusinessWeek). Woo previously served as associate executive vice president for academic affairs at Purdue University. She earned her bachelor’s degree in cconomics with highest distinction and honors, master of science in industrial administration with recognition as Krannert Scholar, and Ph.D. from Purdue University.