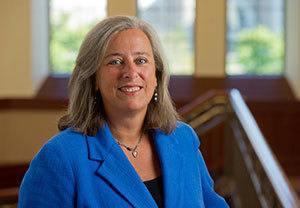 Thursday (Feb. 4) marks World Cancer Day. World Cancer Day was established by the Paris Charter adopted at the World Summit Against Cancer for the New Millennium in Paris on Feb. 4, 2000. The goals of the charter are the promotion of research to cure as well as prevent the disease, upgrades to the provided services to the patients, the sensitization of the common opinion and the mobilization of the global community against cancer.

M. Sharon Stack, the Ann F. Dunne and Elizabeth Riley Director of the Harper Cancer Research Institute and Kleiderer-Pezold Professor of Chemistry and Biochemistry at the University of Notre Dame, notes the importance of research in the battle against cancer.

“According to the American Cancer Society, we can expect over 1,600,000 new cancer cases in the United States in 2016, with approximately 35,000 of those here in Indiana,” she said. “Cancer is a highly complex family of diseases that will not be eradicated with a single magic bullet. Instead, we need to delve deeply to develop a molecular-level understanding of each cancer type, or subtype, to identify disease-specific targets. Additional benefits will result from this detailed level of understanding, including better ways to detect cancer early and to predict which subset of patients will benefit from more aggressive therapies.

“We know that research cures cancer and when resources to support research are made available, the results are amazing. Consider, for example, the statistics on breast cancer. This year there will be almost a quarter million women newly diagnosed with breast cancer. If this were 1970, half of these women would not be alive in five years. Today, however, the overall five-year survival for breast cancer is almost 90 percent, and when diagnosed at early stage, most patients have a five-year survival probability of close to 100 percent. Similar statistics are true in men diagnosed with prostate cancer, who have a five-year survival of 99 percent. This is certainly a cause for pride and celebration and is demonstrated proof of the results that we can expect when resources are devoted to research.”

Stack also noted that in his last State of the Union speech, President Barack Obama unexpectedly called for a “moonshot” to make America the country that cures cancer “once and for all.”

“As President Obama, Vice President Joe Biden and those that serve us in the House and Senate proceed to identify specific mechanisms to fund their moonshot program, the 14.5 million cancer survivors alive today stand in ready testament to the fact that research cures cancer,” Stack said. “Those of us who have watched a child, a parent, a sibling, spouse or friend lose their life to cancer are ready to imagine the new reality.”