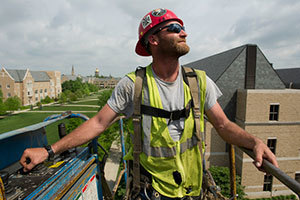 The recent financial crisis truly hit the Michiana construction industry in late 2009 after the completion of major projects at the Saint Joseph Regional Medical Center and Cook Nuclear Plant.

But there was one place the cranes and backhoes never stopped: the University of Notre Dame. And now with the $400 million Campus Crossroads Project, construction is ramping up.

Because of increased demand from Crossroads and other campus projects, Compton said it’s time to start creating opportunities for quality construction jobs. Local unions like his are finally adding new apprentices to learn the trade and carry on after the older generation retires.

“The consistent demand at Notre Dame has been helpful,” Compton said. “Now, the Crossroads project will put a lot of people to work and give new chances to people who haven’t had an opportunity for a while.”

The project includes construction of more than 750,000 square feet of classroom, research, student facility, digital media, performance, meeting, event and hospitality space. The facilities will be housed in three buildings attached to the west, east and south sides of the University’s iconic football stadium. Construction is expected to start in November and be finished in three years.

An Economic Impact Report that Notre Dame released in 2013 found that the University averaged $95 million per year in construction over the last five years. This level of spending accounted for 211 jobs in St. Joseph County and another 115 jobs with contractors in the state.

Overall, the report found that Notre Dame’s employment, spending, students, visitors and research brought nearly $1.2 billion in economic activity and 13,766 jobs to St. Joseph County in 2012. With the Crossroads project over the next three years — plus new academic, research and residential buildings on campus — those figures are expected to grow substantially.

Tim Sexton, associate vice president for public affairs at Notre Dame, pointed out that the Crossroads project at its peak will employ more than 300 construction workers on the site. The economic impact will also continue to be felt after the project is complete.

“With this new academic facility, we’ll be bringing on approximately 80 new faculty members,” Sexton said. “Those faculty members will be coming to our community with their families, buying homes, shopping in grocery stores, sending their kids to schools — and that will have a significant economic effect.”

Sexton noted that Notre Dame is already the second largest tourist attraction in the state of Indiana. The recent impact report found that visitors spent more than $125 million per year in St. Joseph County.

“Once the Crossroads project is complete, it’s going to be another destination point for the more than 2.15 million visitors that come to our campus on an annual basis,” he said. “The Crossroads project will only enhance the amount of money being spent at our local stores, gas stations and restaurants.”

Sexton also said the additional buildings and flexibility of the updated facility will allow it to be utilized for more than just six football games every year. “There could be hockey games or concerts, and those are opportunities for the community and surrounding region to take advantage of the new facility,” he said.

New construction and facilities are the latest examples of a growing partnership between the University and its surrounding community that is generating an economic boost for the region.