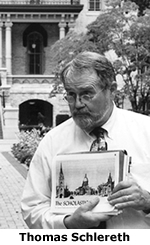 As an undergraduate, American studies Professor Tom Schlereth led tours around Notre Dame. In his book on the history of campus, titledThe University of Notre Dame: A Portrait of its History and Campus,Schlereth invites the reader to walk along with him.

But Schlereth not only talks the talk, he walks the walk. For his classBuilding America,he leads his students out of doors to experience the campus, and history, in a personal way.

Its a dictum of my teaching,he said.Get the students out of the classroom. If you get your students into the world, they can learn to see in a new way.

On one stop, he points out that the Knights of Columbus building was once a post office where the mail stage stopped every two days. It represented the Universitys first federal money.

The post office was staffed by brothers who were paid by the government,he said.

The campus bookstore, he tells students, has migrated to a number of different locations over the years. The movement from its original site in theMainBuilding, to a location on the South Quad, to the new location at theEckCenteralso reveals some of the history of the University. Everything we see on campus, Schlereth says, from buildings to trees to the naming of streets, is the result of conscious decisions by humans, even if the decisions have no paper trail.

Once upon a time, he points out to the group, part of the campus was lined with 70 tall elm trees,a leafy canopy,he said.They all died of Dutch elm disease.Trees and lawns are another part of the collegiate architectural formula, he noted.

The quadrangular arrangement of campus was borrowed from the traditions ofOxfordandCambridge. The architecture of theMorrisInn, he points out, betrays its 1950s roots. More recent buildings on campus, including theEckCenter, return to the traditional look ofcollegiate Gothic.

As the walking tour approached theMainBuilding, Schlereth showed students a plan from the 1960s, fortunately never carried out, to remodel the structure. Several plans were considered over the years, he said, including a 1947 plan to demolish the building altogether because of fire code violations. The 1962 plan proposed adding glass office blocks on either side of the dome, with an underground parking garage behind the building.

As the tour group moved to the broad front porch of theMainBuilding, the students revealed their knowledge of a longtime campus superstitionanyone who uses the main stairs will never graduate from Notre Dame. Several students choose to go around to another entrance, emerging onto the porch from inside the building.

The superstition may be rooted in historical tradition, Schlereth noted. Traditionally, the porch was off-limits to undergraduates until Commencement, when students processed down the stairs to the ceremony, which at that time took place on the lawn in front of the building.

As the class, and the tour, drew to a close, Schlereth pointed out one more thing. If you look closely and carefully, you can see in the etched glass of the main doors a tiny piece of Notre Dame history, a legacy of the turbulent 1960s when the building was the scene of student proteststhe scientific symbol for resistance scratched into the glass.