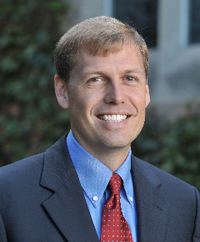 John Griffin, associate professor of political science at the University of Notre Dame, has helped debunk a myth about ideologically extreme legislators in an award-winning paper he co-wrote, raising the question of whether citizens hold elected officials accountable.

Griffin and Brian Newman, a Pepperdine University professor, question this inference in their paper, “Are Ideologically Extreme Legislators Really Out of Step?” The publication has earned them the Emerging Scholar Award from the Midwest Political Science Association, the second-largest political science association in the United States.

“We show that ideologically extreme members of Congress aren’t more likely than moderates to vote in ways that are out of step with their constituents’ policy preferences,” Griffin says.

That’s an important finding, Griffin adds, because previous scholarly works have attributed extremists’ relatively poor showings to the quality of representation they provide—an inference that now turns out to be incorrect.

“The take-home point is that in order to see when legislators are representative—and in order to determine if citizens hold them accountable—we need to compare their behavior with their constituents’ wishes,” he says. “We don’t learn much about representation by comparing legislators’ behavior to that of other legislators.”

The paper is the latest collaboration between Griffin and Newman. It follows their 2008 book “Minority Report: Evaluating Political Equality in America,” in which they analyze the political inequality that racial and ethnic minority groups face and explore ways to reduce it.

Griffin currently is working with John Aldrich, a Duke University professor, on a book that examines the emergence of a competitive party system and explores why it is important for democracy.

Griffin says the book, scheduled for publication in 2011 or 2012, uses the American South to study the question because the Democratic Party controlled most public offices in the region from the end of Reconstruction until World War II.

He sees this latest work, like the paper he co-authored and his earlier research, as part of his larger scholarly passion.

“I am interested in political equality,” he says, "or whether the preferences of citizens are equally represented in the outputs of government.”