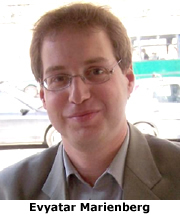 Back in the days when Evyatar Marienberg gave tours inGalilee, he had a feeling that the information he recited about Christian history was too literal, and not completely true.

I kept thinking, Im sure some people believe this. But there are 2 billion Christians, and I have no doubt some of them understand these issues in different ways.

To satisfy his curiosity, Marienberg leftIsraelfor undergraduate studies at the Catholic Institute of Paris. This step admittedly made him something of a curiosity among his Orthodox Jewish family members, if not the faculty of the institute itself. For at least his first year inParis, the institute hesitated to officially enroll him, he says. On one hand, they worried an Orthodox Jew would challenge Christian studies in disruptive ways. On the other hand, they worried he would want to convert, and they were not in the business of offering religious instruction.

His research covers Christianity, Judaism, and comparisons of the two, and ranges from the 20 th century to medieval times. His dissertation, and his work atYeshivaUniversity, dealt mainly with classic, Rabbinic Judaism. In his most recent position as a postdoctoral fellow atTelAvivUniversity, he completed a Hebrew-language book on contemporary Catholicism. His work this year is set squarely in Catholicism as he studies the Second Vatican Council and the ways in which that monumental effort was formed into our historical memory.

Here for just a semester so far, he already has formed memories that define his sense of Notre Dame. It is a place that has exceeded his expectations and one where he feels very comfortable. There is the fact that the campus has embraced both he and his wife, Liane Alitowski, who is teaching piano in the music department. There is its beauty, which has awed him. He even has been awaiting our cold and snow, whichMontreal,StockholmandNew Yorkhave taught him to love.

In his previous postings, theology books by Notre Dame faculty have always filled his shelves. He now hopes to meet the actual authors. And he has been fascinated by the dialogue Notre Dames president, Rev. John I. Jenkins, C.S.C., has launched about the Universitys Catholic character and the need to maintain a pervasive number of Catholic scholars.

I was impressed. I understand that an institution with a religious character would like to keep it by having a significant portion of the faculty sharing its faith,he said.At the same time, he discussed the importance of having non-Catholic and non-religious faculty. He spoke about how important non-Catholic members are.

Having spent his early graduate school years inParisamong colleagues who were priests and nuns, Marienberg is accustomed to being among Catholic religious. Yet various incidents have taken him by surprise, among them faculty gatherings opened with a prayer. Prayer is less likely to happen at a Catholic university in fiercely secularFrance, Marienberg says. Nor would it happen inIsraelor at Yeshiva University, since Jewish prayers have prescribed times and places.