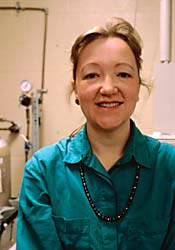 Brennecke, only the second woman to receive the award in its 58-year history, was cited for herfundamental scientific and technological contributions to the development of ionic liquids as separation and reaction solvents.She will receive the award and deliver a lecture at the November 2007 AIChE annual meeting inSalt Lake City.

Brennecke is known internationally for her research in the development of solvents, including supercritical fluids and ionic liquids, which are less harmful to the environment. Her primary interests in developing ionic liquids are in the measurement and modeling of thermodynamics, thermophysical properties, phase behavior and separation.

Brennecke is director of theNotre DameEnergyCenter, an initiative that unites researchers devoted to developing new energy technologies to meet a compelling national and international need.

In 2001, she received the Ipatieff Prize from the American Chemical Society in recognition of her pioneering high pressure studies of the local structure of supercriticalfluid solutions and the effect of this local structure on rates of homogeneous reactions.

Brennecke has been elected chair of the Council for Chemical Research and will assume leadership of the organization in 2007.

AIChE is the worlds leading organization for chemical engineering professionals with more than 40,000 members from 93 countries.