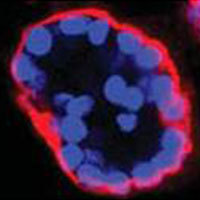 When it comes to fighting cancer, the enemy of our enemy could be our friend, according to a University of Notre Dame researcher.

As studies continue to suggest antioxidants could actually help cancer cells grow, the research of Zachary Schafer, the Coleman Foundation Associate Professor of Cancer Biology, can help explain why. Schafer studies how breast cancer cells survive during metastasis, the movement of cancer cells from one area of the body to another. His research may help explain the results of some landmark clinical trials over the past 20 years, which have shown various supplements high in antioxidants can actually increase the risk of various forms of cancer.

“There are a number of trials that show counterintuitive results, but those are never really explained at a cellular level,” says Schafer. “That’s where what we’re doing comes into play.”

Schafer’s research shows that cancer cells’ survival can be aided by antioxidants that protect these cells from free radicals. “We know free radicals are a detriment to cells, in general,” Schafer says. “We’re finding that getting rid of those free radicals means stopping them from doing things that could be detrimental to cancer cells as well.”

Schafer’s research in this area was first published in 2009 in the journal Nature, with follow-up findings reported in a 2013 edition of Cancer Research. He points out that his discoveries to this point are not a prescription to swear off antioxidants altogether. “It is not possible to directly extrapolate our cell culture and small animal studies to the effects of humans taking dietary antioxidant supplements.”

That being said, Schafer notes that his and other studies do suggest differences in how antioxidant supplements might affect healthy vs. cancer-stricken individuals. “If you are a person who is healthy, meaning no tumors of any kind, antioxidants are probably going to protect against cancer,” he says. “But if you’re someone who has been diagnosed with cancer, there’s a sizable amount of data now, in different contexts, which suggest that antioxidants, in addition to helping those normal cells, might be helping those cancer cells too.”