“In the context of a positivist and relativist culture, Joseph Ratzinger and later Benedict XVI points out the deep division of knowledge and the excessive specialization of the university field that leave out an overall vision that gives meaning to each specific science,” says Father Federico Lombardi, president of the Ratzinger/Benedict XVI Vatican Foundation and a jury member for the prize. In opposition to this prevailing culture, the Expanded Reason Awards “seek to promote a transdisciplinary dialogue that not only appreciates the interdisciplinarity of the sciences, but also affirms the relevance of broader philosophical and theological concerns.”

The awards are distributed in both teaching and research categories, with Brad Gregory receiving honorable mention for his research. John C. Cavadini, Notre Dame Professor of Theology and Director of the McGrath Institute for Church Life, led a team of four colleagues from Notre Dame that won one of the awards in the teaching category. 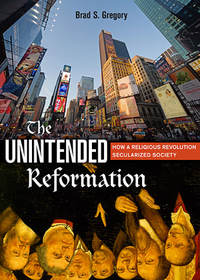 The prize-giving ceremony took place on Sept. 24 in the Casina Pio IV, home of the Pontifical Academy of Sciences, in the Vatican Gardens. The celebration occurred in conjunction with an international symposium focused on the possibility for dialogue among science, philosophy and theology in university communities today. Winners of the Expanded Reason Awards were invited participants during the conference and had the opportunity to meet Pope Francis after the weekly papal audience on Sept. 26.

“It is a great honor to have my book, 'The Unintended Reformation,' recognized in this way by the Expanded Reason Awards,” Gregory said. “The awards, like NDIAS and Notre Dame as a Catholic research university more broadly, encourage an integral understanding of all knowledge within a vision of reason and academic freedom that is not constrained by metaphysical naturalism.”

Originally published by Kristian Olsen at ndias.nd.edu on Oct. 8.