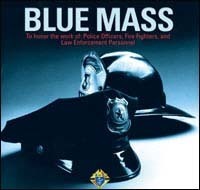 The seventh annual Blue Mass for police officers, firefighters, rescue workers and their families will be celebrated at 5:15 p.m. Oct. 29 (Monday) in the University of Notre Dame’s Basilica of the Sacred Heart.

Notre Dame’s president, Rev. John I. Jenkins., C.S.C., will preside at the Mass, and Rev. Richard V. Warner, C.S.C., director of Campus Ministry, will give a homily.Philip Johnson, director of the Notre Dame Security Police, and John Antonucci, chief of the Notre Dame Fire Department, will be lectors.Sacred music will be provided by Notre Dames Liturgical Choir.

Cpl. Nick S. Polizzotto of the South Bend Police Department, and Indiana state trooper David E. Rich, both of whom were killed in the line of duty this year, will be especially remembered during the Mass, as will Notre Dame Security Police director Rex J. Rakow, who died in March after a long illness.

Among the special guests at the Mass will be members of the International Association of Campus Law Enforcement Administrators.

The Blue Mass, to which members of all the police and fire departments in the area are invited, is named for the predominant color of uniforms worn by officers in police and fire departments nationwide.It was first celebrated at Notre Dame in 2001 as the traditionalmonth’s mindMass for the victims of the attacks of Sept. 11 and for the police officers, firefighters and rescue workers who died while serving and protecting others.