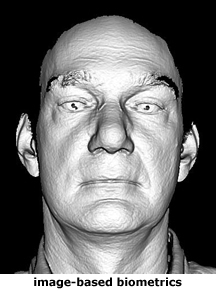 On the face of it, the old saying goes, things are not always as they seem. However, when it comes to faces, things are almost always what they seem, according to a new report coauthored by two University of Notre Dame biometrics researchers.

Kevin Bowyer and Patrick Flynn have been researching the feasibility of image-based biometrics and multi-biometrics since 2001, including first-of-kind-comparisons of face photographs, face thermograms, 3-D face images, iris images, videos of human gait, and even ear and hand shapes.

A biometric is a stable and distinctive physiological feature of a person that can be measured and used to identify them; the fingerprint is probably the most familiar example.

In the wake of the terrorist attacks ofSept. 11, 2001, theU.S.government has called on academic researchers and the private sector to dramatically improve facial and iris recognition technologies. Facial recognition technology converts photos into numerical sequences that can be instantly compared with millions of photos in a database.

As a result, federal agencies examining the feasibility of these technologies are in need of teams that can define and executechallenge problemsdesigned to assess biometric system performance on a level playing field to minimize biases.

In the recently released NIST report, Bowyer, Flynn and other researchers report that face recognition technology has improved dramatically. False recognition rates produced by the best systems have dropped 90 percent over the last four years. They found that facial recognition technology can be better than human identification of faces, with accuracy rates near 99 percent.

The report did not rank individual vendor systems based on performance.