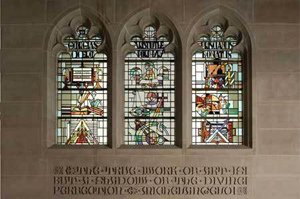 Students looking for an opportunity to showcase their statistical research as undergraduates—and who want to stand out from the crowd after graduation—may want to take a suggestion from Thomas Foote: submit a paper for the University of Notre Dame’s Bernoulli Awards.

Not only did Foote write the paper that won the 2009 first prize, but he credits that research experience with helping him develop the technical and analytical skills he now uses as an investment banking analyst for BMO Capital Markets in Chicago.

The competition is open to undergraduates of any major across campus.

“I would absolutely encourage people to enter the competition,” said Foote, a 2009 Notre Dame graduate who earned bachelor’s degrees in economics and finance. “It’s very rewarding and a great capstone experience to your time at Notre Dame.”

The Bernoulli Awards aim to encourage research among undergraduates that is worthy of being published in peer-reviewed journals, explains Richard Jensen, chair of the Department of Economics and Econometrics. Each year, the competition’s panel of judges decides how many papers—if any—earn the available prizes, which include:

The goal, Jensen says, is to push students to learn how to conduct statistical research, a skill that will pay dividends in a variety of fields, including business, engineering and mathematics, as well as the sciences and social sciences.

The competition is sponsored by an alumnus whose statistical research landed him a job immediately after graduation—even amidst an economic recession.

“The anonymous donor who funds these awards uses statistical analysis in his own financial management firm,” Jensen said. “Many businesses want students who have developed skills in statistical analysis, and students cannot succeed in graduate programs in many disciplines without these skills.”

Jensen points to Foote as an example of what an undergraduate can achieve with an early start. Foote spent his senior year working on the paper, building on the foundation he laid as a sophomore. That’s when, as a Kellogg Institute International Scholar, he began working as a research assistant for Jeffrey Bergstrand, a professor in the Department of Finance who served as his research mentor.

Jensen says that experience—working with a faculty member to sharpen a senior thesis—is typical for a Bernoulli competitor, and Foote says it’s one more opportunity students should pursue.

“Anyone interested in writing a thesis or competing for the Bernoulli Awards should get involved in research as early as possible,” Foote says. “It lets you explore areas that might interest you for further research, and the best way to learn how to conduct research is to learn from someone who is currently engaged in it.”

Foote explored African trade difficulties in his award-winning paper, “Economic Integration in Africa: Effectiveness of Regional Agreements.” After revealing that African trade agreements don’t appear to follow the classic economic model—which posits that trade increases when barriers are reduced—he argued that experts should reexamine current policies in an effort to spur development.

In particular, Foote suggested that economists should include more—and more recent—trade agreements in their study of African commerce and should look at various industries to see how to better reduce trade barriers.

Foote says this experience doing in-depth research helped him get a job and start his professional career prepared to succeed.

“What sticks with you from the process is the ability to set a goal,” he said, “and to provide new analysis that goes beyond the current literature in the field.”