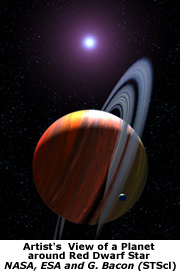 A NASA Hubble Space Telescope research team headed by University of Notre Dame astrophysicist David Bennett has, for the first time, identified the parent star of a distant planet that was discovered through gravitational microlensing.

In the gravitational microlensing technique, a foreground star-planet system slightly amplifies the light of a background star that momentarily aligns with it.Knowledge of exactly which types of host stars around which remote planets revolve is fundamental to constraining theories of planet formation.

The Hubble Space Telescope, with its image sharpness and stability, is ideally suited to identify the host stars for gravitationally-lensed planets found in our Milky Way Galaxy.

The identification of the host star is critical for a complete understanding of the planets discovered by microlensing,Bennett said.

The research team noted that the host star, identified as OGLE-2003-BLG-235L/MOA-2003-BLG-53L, is more massive and, therefore, hotter than expected for a random field star in our galaxy. It is 63 percent the mass of our Sun, while the average star has only 30 percent of the Suns mass. The host star identification also enabled the researchers to determine its distance at 19,000 light-years and the planets mass of 2.6 Jupiter masses. The characteristics of the microlensing event show that the planet is in a Jupiter-sized orbit around it parent red star.

The planet was discovered in 2003 through ground-based gravitational microlensing observations. This technique takes advantage of the random motion of stars, which are generally too small to be noticed without precise measurements. If one star passes precisely, or nearly precisely, in front of another star, the gravity of the foreground star acts like a giant lens, magnifying the light from the background star.

The sharp Hubble images allowed the research team to separate out the background source star from its neighbors in the very crowded star field of the galactic bulge. However, the star appeared to be about 20 percent brighter than expected. This additional brightness is most likely from the foreground lens star, which hosts the planet. Although the Hubble images were taken nearly two years after the lensing event, the source and lens star were still so close together on the sky that they essentially appeared as one star.

Through detailed analysis of the images taken with different color filters, the astronomers were able to see that the apparent position of the star as seen in infrared light was offset from the position seen in blue light. The lens star is offset by 0.7 millarcseconds (the angular width of a dime seen 3,000 miles away) from the source star.

This observation is consistent with the core-accretion model for giant planets, which predicts that they grow from small rocky seed objects in a circumstellar disk. A key prediction of the core-accretion model is that gas giant planets rarely will form around low-mass stars. The core-accretion theory predicts that most of the massive planets will orbit stars that are more massive than average. The mass of the gas and dust disk out of which the planet forms is expected to be higher when the stellar mass is higher and, therefore, the planets that form this disk also can be expected to be more massive.

Follow-up observations with Hubble in coming years should reveal an increasing gap between the foreground and background stars.

Bennett is a founding member of the MACHO (Massive Compact Halo Object ) Project, which discovered the first known gravitational microlensing event in 1993. His theoretical work, in collaboration with S.H. Rhie, demonstrated that gravitational micolensing is a particularly sensitive method for the detection of Earth-mass planets orbiting other stars, and his groups observational work first demonstrated sensitivity to Neptune-mass planets in Jupiter-like orbits.

Bennetts most ambitious project is the proposed Microlensing Planet Finder (MPF), which will survey the galaxy for planets down to mass of Mars. If funded, MPF will provide the first estimate of the abundance of Earth-like planets throughout our galaxy.