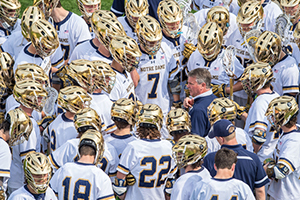 On the eve of the No. 1-ranked University of Notre Dame men’s lacrosse team participating in the NCAA Championship Weekend in Philadelphia, an alumnus of the University and his wife have made a gift to endow the program’s head coaching position.

A $3 million gift from John and Mollie Baumer of Manhattan Beach, California, will underwrite the salary of the head coach, provide stability and resources for the long term and create funds for use within the department and across campus.

“We are very appreciative of John and Mollie Baumer’s generosity,” said Jack Swarbrick, Notre Dame’s vice president and director of athletics. "This is a gift that reflects both the relationship between the extended Baumer and Corrigan families that goes back more than three decades and the Baumers’ appreciation of the extraordinary program that Kevin Corrigan has built at Notre Dame.

“Notre Dame lacrosse has not only joined the ranks of the best lacrosse teams in the country, but Kevin has been equally successful in building a program with a winning track record off the field. This is reflected in the selection of the team’s youth mentoring program for the ACC/United Way Game Changers Award and Kevin’s unique approach to advancing the career aspirations of his student-athletes through a carefully constructed networking program with Notre Dame alumni. The Baumers’ gift is a fitting tribute to Kevin’s abilities and his dedication to the student-athlete model.”

“I want to thank John and Mollie Baumer for their wonderful gift and their generous support of Notre Dame and our lacrosse program,” Corrigan said. “This is extremely meaningful to me, because I know that the Baumer family, like the Corrigan family, shares a great love for Notre Dame and for the value of the extraordinary experience that student-athletes have here.”

John Baumer is a native of South Bend where his father, Fred Baumer, was employed as the comptroller at Notre Dame for many years. He earned a bachelor’s degree in finance from Notre Dame in 1990 and a master of business of administration degree from the University of Pennsylvania’s Wharton School of Business in 1995. He is a senior partner at Leonard Green & Partners of Los Angeles, one of the nation’s leading private equity firms with more than $15 billion of private equity capital raised since inception.

Mollie Baumer is a 1990 graduate of Saint Mary’s College where she was a varsity soccer player. The couple has three children in the ninth, seventh and fourth grades who attend Catholic school in the Los Angeles area. John is a member of Notre Dame’s Advisory Council for the Student-Athlete, Campaign Cabinet and Wall Street Leadership Committee.

“We have known the Corrigan family for over 30 years and have tremendous respect and admiration for the success that Kevin has achieved in building the Notre Dame lacrosse program from virtually scratch into one of the preeminent programs in the country,” Baumer said. “The success on the field combined with the 100 percent graduation rate for the lacrosse student-athletes is a remarkable testament to Kevin’s coaching and leadership skills combined with his embracing of the core Notre Dame values.”

The Irish earned the No. 1 seed in this year’s NCAA Championship after spending four straight weeks ranked No. 1. Corrigan’s record at Notre Dame is 265-122 (.684). His teams have won 17 conference titles, including the 2014 Atlantic Coast Conference championship. In 2015, his Irish won the ACC regular-season crown with a perfect record. Corrigan is a six-time conference coach-of-the-year selection (five times in the Great Western Lacrosse League and in 2012 in the Big East Conference).

Corrigan in 2009 received the Frenchy Julien Service Award from the United States Intercollegiate Lacrosse Association for outstanding and continuous service to the sport. His 2008 team received an institutional award recognizing his program’s community service — and his current squad earned the 2015 ACC/United Way Game Changers Award for its work mentoring youths in local schools. Every one of his Irish lacrosse seniors has graduated.