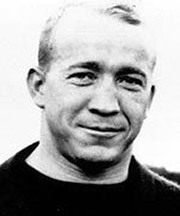 The 75 th anniversary of the death of legendary Notre Dame football coach Knute Rockne will be marked Friday morning (March 31) by the ringing of bells in the Basilica of the Sacred Heart on campus.

Also on campus Friday, there will be multiple showings of a 52-minute video documentary on Rockne titledKnute Rockne and His Fighting Irish.The documentary, which originally aired on the PBS showThe American Experience,will be shown free of charge on the hour from3to6 p.m.in the Hesburgh Librarys Carey Auditorium.

Other tributes to Rockne will take place at the crash site and inVoss,Norway, his birthplace. More details are available at http://und.collegesports.com/sports/m-footbl/spec-rel/032706aaa.html .

As an undergraduate, Rockne worked as a chemistry research assistant in the laboratory of Rev. Julius A. Nieuwland, C.S.C., the renowned Notre Dame chemist who discovered the formula for synthetic rubber. Upon graduating, Rockne was offered a position at the University as a graduate assistant in chemistry, which he accepted on the condition that he be allowed to work as an assistant to football coach Jesse Harper.

When Harper retired after the 1917 season, Rockne was appointed head coach andNotre Dame’s football program soared to national prominence. He coached from 1918 through 1930, finishing with a 105-12-5 (.881) career record that still ranks as the best winning percentage in the history of college football. His teams won consensus national championships in 1924, 1929 and 1930, and he was inducted into the College Football Hall of Fame with the inaugural class in 1951.