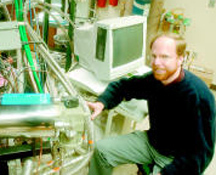 Dennis Jacobs, professor of chemistry and biochemistry at the University of Notre Dame and the 2002 recipient of the U.S. Professor of the Year Award, has been appointed vice president and associate provost at the University, effective Aug. 1.p. Jacobsprimary responsibility will be oversight of Notre Dames undergraduate education and the international studies program, both of which are rated among the best in American higher education. Other areas of responsibility will include the Honor Code, major University institutes and centers and the ROTC programs.p. Like so many of our faculty, Dennis combines the very best attributes of both a teacher and a researcher,said Nathan O. Hatch, Notre Dames provost, in announcing the appointment.That makes him ideally suited to play this pivotal role in the quest to strengthen our scholarly and research dimensions while also continuing our longstanding and unchanging commitment to excellence in undergraduate education.p. Jacobs earned his doctorate in chemistry from Stanford University after receiving two bachelors degrees, in chemistry and physics, from the University of California at Irvine. He joined the Notre Dame faculty in 1988 and was named a fellow of the Center for Social Concerns in 2000 and a fellow of the Kaneb Center for Teaching and Learning this year.p. Jacobslaboratory research involves the study of nonthermal processes at the gas/solid interface. When NASA returns the space shuttle to service, Jacobs will fly two separate experiments that will record how polymeric materials (plastics) degrade as they are continuously attacked by energetic particles surrounding the International Space Station. The research seeks to identify and inhibit the chemical pathways by which plastic materials are eroded on the exterior of an orbiting spacecraft. Both experiments are part of a national effort to develop inexpensive,lightweight materials for use in next-generation satellites.p. Outside the laboratory, Jacobs has been a national and campus leader in the scholarship of teaching and learning, work that has led to numerous teaching awards from Notre Dames College of Science and First Year of Studies and from the Carnegie Foundation for the Advancement of Teaching.p. Jacobs was named a national Carnegie Scholar in 1999-2000, and two years later the foundation recognized him with its highest honor, the U.S. Professor of the Year Award for Doctoral and Research Universities. The award honors dedication to teaching, commitment to students and creative approaches to education, and is the only national award to acknowledge teaching excellence.p. Jacobs was cited for his innovative efforts to help students learn chemistry in different classroom settings. Among his accomplishments was the redesign of an important general chemistry course that puts an emphasis on collaborative learning. The revitalized course has led to greater student success and engagement and is considered a national model for the trend toward peer-led curricula.p. In collaboration with community organizations, Jacobs also created a course in which students collect dust, soil and water samples from local homes to identify and reduce the risk of lead poisoning in young children. As students realize how their professional skills can immediately benefit the lives of South Bend families, the experience deepens the studentscommitments to civic engagement and social justice.p. In addition, Jacobs and fellow chemistry professor Bradley D. Smith have created a free, national Web-based survey tool and database for assessing how students use and value their textbooks. Called TextRev, it is believed to be the first national tool to gather feedback from students on textbook use and efficiency.p. Jacobs is the third recent appointment in the Provost Office, joining Christine Maziar and Jean Ann Linney as vice presidents and associate provosts. Maziars responsibilities will include administration of budgets, academic space management, and the implementation of the Universitys academic strategic plan. Linney will have broad responsibility for the Universitys relationship with its faculty, including promotion and tenure, faculty governance and affirmative action initiatives. They also will begin Aug. 1.