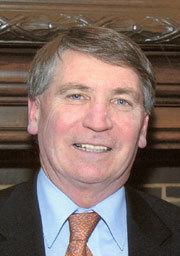 Dennis Richardson, Australian ambassador to the United States, will discuss U.S.-Australia relations and highlight the country’s green initiatives during a lecture at 4:30 p.m. Wednesday (April 22) in Room 161 of the Mendoza College of Business at the University of Notre Dame.

Appointed to his current position in 2005, Richardson formerly served in Australia’s Foreign Service, was the principal adviser to the prime minister, led the review of the Australian Intelligence Community, and served as deputy secretary of the Department of Immigration and Citizenship and director general of security for the Australian Security Intelligence Organisation. In 2003, Richardson was made an Officer of the Order of Australia.

The event, which is free and open to the public, is sponsored by Notre Dame’s Office of International Studies and Pi Sigma Alpha, the University’s political science honor society.