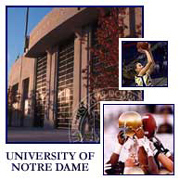 After a self-study and review process, the University of Notre Dame athletics program received notice this week that it has been unconditionally recertified by the NCAA Division I Committee on Athletics Certification.p. Notre Dame last was certified in 1997 in the first cycle of an NCAA process established in 1993 with the purpose of ensuring integrity in collegiate athletics programs and assisting departments in improving their operations.p. The certification process centers on a self-study conducted by a committee that is led by each institution’s chief executive officer and is composed of a broad cross-section of the University community. It includes a review of six components: governance and commitment to rules compliance, academic integrity, fiscal integrity, equity, welfare, and sportsmanship.p. Following the self-study, a 15-member panel composed of representatives from other Division I institutions reviewed the material and made its certification recommendation.p. The unconditional certification means that Notre Dame, as well as nine other institutions that received approval this week, operates its athletics program in “substantial conformity with operating principles adopted by the Division I membership.”p. In a written report, the certification committee offered praise for all components of the Notre Dame athletic department.p. In the area of academic integrity and support, the report noted that Notre Dame is “committed to the academic success of its student-athletes and demonstrates this by requiring three more core courses than what is required by the NCAA.” It also stated that “student-athletes are quite satisfied with the quantity and quality of academic support service and attribute much of the success around graduation rates to this service.”p. In the areas of gender and minority equity, the committee reported that Notre Dame has “affirmed and demonstrated its commitment to fair and equitable treatment” of both male and female student-athletes and minority student-athletes.p. Since the last certification process, Notre Dame has improved its athletics program in numerous ways, including the construction of the James and Leah Rae Morse Center for Academic Services for Student-Athletes, the addition of two sportsrowing and lacrossefor women, and the creation of 86 new grants-in-aid, which, beginning this fall, will make all sports fully funded for the maximum amount of financial aid allowed by the NCAA. The University also has enhanced its Student Development (formerly Life Skills) Program, which was created just before the last certification process to help student-athletes reach their full potential in all areas of their lives. In 2000, the initiative received a Program of Excellence Award from the NCAA.p. Notre Dame’s academic and athletic successes since it last was certified have been many, including:p.  Two Irish teams, women’s basketball and fencing, won national championshipsp.  The men’s and women’s programs each won the Big East Commissioner’s Trophy for seven consecutive yearsp.  The National Collegiate Scouting Association rated Notre Dame second (behind Stanford) in its Division I-A rankings for top academic and athletic universities, based on graduation rates, the U.S. News&World Report academic survey, and the NACDA Directors’ Cup standingsp.  From 2000 to 2003, Irish student-athletes have won 32 Academic All-American awards, more than for any other universityp. Basketball player Ruth Riley was named the Academic All-American of the year for all sports in 2000-01p.  The NCAA and USA Today presented Notre Dame with the 2003 Academic Achievement Award for the highest graduation rate for all student-athletes among Division I-A institutionsp.  Nine student-athletes won NCAA Postgraduate Scholarshipsp.