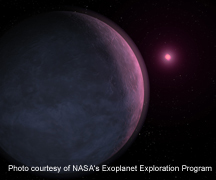 An international team of astronomers led by David Bennett of the University of Notre Dame has discovered an extra-solar planet of about three Earth masses orbiting a star with a mass so low that its core may not be large enough to maintain nuclear reactions. The result was presented Monday (June 2) at the American Astronomical Society annual meeting in St. Louis.

The planet, referred to as MOA-2007-BLG-192Lb, establishes a record for the lowest mass planet to orbit a normal star. The star, MOA-2007-BLG-192L, is at a distance of 3,000 light years and the lowest mass host star to have a companion with a planetary mass ratio. The mass of the host is about 6 percent of the mass of the sun. Such a star is called a brown dwarf, because this is slightly below the mass needed to sustain nuclear reactions in the core. But the measurement uncertainty also permits a host mass slightly above 8 percent of a solar mass, which would make MOA-2007-BLG-192L a very low-mass hydrogen burning star.

Our discovery indicates that even the lowest mass stars can host planets,Bennett said.No planets have previously been found to orbit stars with masses less than about 20 percent of that of the sun, but this finding suggests that we should expect very low-mass stars near the sun to have planets with a mass similar to that of the Earth. This is of particular interest because it may be possible use NASAs planned James Webb Space Telescope to search for signs of life on Earth-mass planets orbiting low-mass stars in the vicinity of the sun.

The discovery of the MOA-2007-BLG-192L star-planet system was made by the Microlensing Observations in Astrophysics (MOA), which includes Bennett, and the Optical Gravitational Lensing Experiment (OGLE) collaborations using the gravitational microlensing method.

Gravitational microlensing takes advantage of the fact that light is bent as the rays pass close to a massive object, like a star. The gravity from the mass of the intervening object, or lens star, warps surrounding space and acts like a giant magnifying glass. As predicted by Albert Einstein and later confirmed, this phenomena causes an apparent brightening of the light from a backgroundsourcestar. The effect is seen only if the astronomers telescope lies in almost perfect alignment with the source star and the lens star.

Astronomers are then able to detect planets orbiting the lens star if the light from the background star also is warped by one or more planets.

The primary challenge of the microlensing method is the precise alignments needed for the planetary microlensing signals are quite rare and brief, often lasting less than a day. This discovery was made possible by the new MOA-II telescope at New Zealands Mt. John Observatory, using the MOA-cam3 camera, which is able to image an area of sky 13 times larger than the area of the full moon in a single image.

The new MOA telescope-camera system allows us to monitor virtually all of the known microlensing events for planetary signals,Bennett said.We would not have made this discovery without it.

The microlensing observations provided evidence that the host star has a mass of about 6 percent of the mass of the sun. This was confirmed by high angular resolution adaptive optics images with the Very Large Telescope (VLT) at the European Southern Observatory in Chile. These images confirm that the planetary host is either a brown dwarf or a very low-mass star.

The planet orbits its host star or brown dwarf with an orbital radius similar to that of Venus. But the host is likely to be between 3,000 and 1 million times fainter than the sun, so the top of the planets atmosphere is likely to be colder than Pluto. However, the planet is likely to maintain a massive atmosphere that would allow warmer temperatures at lower altitudes. It is even possible that interior heating by radioactive decays would be sufficient to make the surface as warm as the Earth, but theory suggests that the surface may be completely covered by a very deep ocean.

This result also supports the 1996 prediction by Bennett and Sun Hong Rhie that the microlensing method should be sensitive to Earth-mass planets.

Ill hazard a prediction that the first extra-solar Earth-mass planet will be found by microlensing,Bennett said.But well have to be very quick to beat the radial velocity programs and NASAs Kepler mission, which will be launched in early 2009.

The OGLE group is comprised of astronomers from Warsaw University Observatory in Poland, the Universidad de Concepción in Chile, and the University of Cambridge in England. Additional collaborators who provided the VLT data and analysis are from the Institut dAstrophysique de Paris, the Observatoire Midi-Pyr´en´ees, and the Observatoire de Paris in France, the European Southern Observatory in Chile, and Heidelberg University in Germany.

More information on the discovery, including animations, can be found at www.nsf.gov .