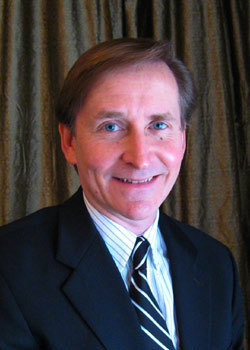 University of Notre Dame professor of physics Peter Garnavich has research interests that cover a wide range of topics in observational astrophysics. In preparation for the Tuesday (June 5) Transit of Venus, he offers an explanation of the science behind this rare event.

“The transit of Venus across the face of the sun is one of the rarest events in the solar system. Venus has passed directly between the Earth and sun only 52 times between 2000 BC and 2000 AD; that’s 4,000 years! There have only been seven Venus transits since the invention of the telescope in the early 1600s. The transit on June 5 will be No. 8. The next chance to see a Venus transit is in 105.5 years.

“Based on his careful calculations, Johannes Kepler was the first scientist to predict that Venus would pass across the face of the sun, and the first observed transit was in 1639.

“During a transit, Venus appears as a large black dot moving slowly across the solar disk. At the start of the transit of 1761, a ring of light was seen around the disk of Venus and it was realized that the planet Venus must have an atmosphere. Today, astronomers are using the same technique to study the atmospheres of extrasolar planets that directly pass between us and their star. NASA’s Kepler mission is a dedicated space telescope that searches for planets transiting distant stars. While we have a close-up view of Venus, the distant transits show up as a very small fading of a star’s light. The Kepler mission has discovered hundreds of planets using the transit technique.

“Why is the alignment of Venus and the sun so rare? The orbit of the Earth defines a plane called the ecliptic, and the orbit of Venus is inclined to the ecliptic plane by 3.8 degrees. Since the face of the sun appears only a half-degree across as seen from the Earth, Venus usually misses the solar disk either passing just below or above the sun. Only when Earth and Venus are both near the line where their orbital planes meet can a transit occur.

“Kepler’s math defined the relative orbits of the planets very accurately, but the size of the solar system remained uncertain. Even the distance between the Earth and the sun, called the ‘astronomical unit,’ was poorly known in the 18th and 19th centuries. Sir Edmond Halley (of Halley’s comet fame) and others realized that the transit of Venus provided an opportunity to directly measure the astronomical unit and set the scale of the solar system. By sending out observers around the world to make accurate timing of the start and end of a transit of Venus, the distance to the sun could be measured geometrically.

“The true size of the solar system was the most important cosmological question for over 200 years. Just as measuring the expansion rate of the universe, the Hubble constant, occupied astronomers for the past 80 years, the length of the astronomical unit was the fundamental problem of the 1700s and 1800s. Expeditions to observe the Venus transits of 1761 and 1769 were sent around the world but failed to achieve the timing accuracy needed for a good measurement of the astronomical unit. But expeditions to the transits of 1874 and 1882 allowed the astronomical unit to be measured to an accuracy of 0.2 percent.

“The transits of 2004 and 2012 are not scientifically critical for setting the size of the solar system. Using satellites and radar, we now know the distance between the Earth and sun to better than the length of a football field.

“At the time of the Venus transit of 1882, there were eight known planets, all in orbit around the sun. For the Venus transit of 2012, there are over 700 cataloged planets, many discovered by their transit across the face of their stars by the Kepler satellite. None of these new extrasolar planets are as small or as Earth-like as Venus. But as we watch this latest transit of Venus, we can imagine on another world across the galaxy, excited extraterrestrial astronomers watching a double transit of two small planets temporarily dim the light of an ordinary star.”

Garnavich was awarded a share of the 2007 Gruber Prize in Cosmology for his work in the High-Z Supernova Search team’s discovery of the accelerating universe. He also is co-investigator on the largest Hubble project ever undertaken, one that will watch galaxies form and hunt for distant explosions.