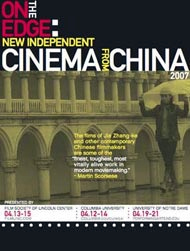 The University of Notre Dame will welcome filmmakers and scholars to campus Thursday to Saturday (April 19 to 21) for its annual Asian Film Festival and conference, this year titled On the Edge: New Independent Cinema fromChina.

Anne Thurston, a senior research professor atJohnsHopkinsUniversitysSchoolofAdvanced International StudiesinWashington,D.C., and author of numerous books on Chinese contemporary politics, will deliver a keynote address titledRising China? The OtherChina? Thoughts fromChinas Grassroots.Her talk, which will detail the countrys social realities that she feels are commonly misunderstood byWashingtonpolicymakers, will take place at4 p.m.April 19 in the Browning Cinema of theDeBartoloCenterfor the Performing Arts.

The films, to be screened in the Browning Cinema, are:

A complete schedule of events is available on the Web at http://performingarts.nd.edu/index.php?category=ON%20THE%20EDGE:/series .