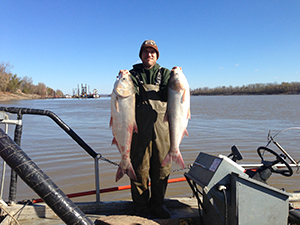 Two silver carp on the Mississippi River in Missouri. Photo by Sara Tripp/Missouri Department of Conservation. Courtesy of University of Michigan.

If they successfully invade Lake Erie, Asian carp could eventually account for about a third of the total weight of fish in the lake and could cause declines in most fish species — including prized sport and commercial fish such as walleye, according to a new computer modeling study.

However, most of the expected declines in Lake Erie will not be as extreme as some experts have predicted, according to the food-web study by the University of Notre Dame’s David Lodge and colleagues from other American and Canadian research institutions. A few fish species, including smallmouth bass, would likely increase.

The study is the first to use a food-web model to examine the likely impacts of bighead and silver carp in Lake Erie. These plankton-eating Asian carp are established in watersheds close to the Great Lakes, but not in the lakes themselves.

According to the study, walleye, rainbow trout, gizzard shad and emerald shiners could all decline, with declines in emerald shiner of up to 37 percent. Smallmouth bass stood to gain the most, with increases of up to 16 percent.

A paper summarizing the findings was published online in the journal Transactions of the American Fisheries Society on Dec. 30.

The model results suggest that Asian carp could eventually account for up to 34 percent of the total fish weight in the lake, said Hongyan Zhang, an assistant research scientist at the University of Michigan’s Cooperative Institute for Limnology and Ecosystems Research, School of Natural Resources and Environment and co-author.

“Fortunately, the percentage would not be as high as it is today in the Illinois River, where Asian carp have caused large changes in the ecosystem and have affected human use of the river,” she said.

Previous predictions of Asian carp’s influences in the Great Lakes have ranged widely. Some experts say Asian carp could decimate Great Lakes fisheries and food webs, while others suggest the effects would likely be minor because much of the Great Lakes is not suitable habitat for Asian carp.

Results of the new study fall somewhere between the two extremes.

“This study goes beyond previous efforts in two significant ways. It focuses on the food webs and — where model input data were not available — it includes uncertainty estimates from experts,” said co-author Ed Rutherford, a fisheries biologist at the Great Lakes Environmental Research Laboratory (GLERL) in Ann Arbor, a U.S. National Oceanic and Atmospheric Administration facility.

To include uncertainty in model predictions, team members interviewed 11 leading experts on Asian carp biology and Great Lakes ecology and fisheries, then incorporated the experts’ estimates into the model. The experts were also asked to indicate the level of uncertainty associated with each statement they provided.

“We don’t know how these two Asian carp species are going to do in Lake Erie, so we have to incorporate that uncertainty into our model projections,” said co-author Doran Mason, a research ecologist at GLERL. “It’s like using computer models to predict a hurricane’s path and intensity and including the margin of error in the forecast.”

“Model results suggest the most likely intensity is severe — who wants a third of the fish biomass in Lake Erie to be Asian carp? — but that possible outcomes include both stronger and weaker impacts. It is also important to remember that our research provides scenarios for impact only on the food web and only in Lake Erie itself. Impacts like jumping fish hitting people are not included, nor are any impacts in tributaries of Lake Erie that might suffer impacts like those in the Illinois River,” said Lodge, founder and director of the University of Notre Dame Environmental Change Initiative (ND-ECI), which tackles the interrelated problems of invasive species, land use and climate change, focusing on their synergistic impacts on water resources.

The team has shared its Lake Erie results with Great Lakes resource managers to help inform decisions related to Asian carp. Of the Great Lakes, Erie may be most vulnerable to Asian carp invasion due to its proximity to waters where Asian carp exist, the presence of adequate food and the availability of suitable spawning habitat.

The same research team is now working on modeling studies to predict the influence of Asian carp in lakes Michigan, Huron and Ontario, as well as a study of the regional economic impacts associated with Asian carp in Lake Erie.

Other authors of the Transactions of the American Fisheries Society paper, in addition to Lodge, Zhang, Rutherford and Mason, are Jason T. Breck of the University of Wisconsin-Madison; Marion E. Wittmann of University of Nevada-Reno; Roger M. Cooke of Resources for the Future and Delft University; John D. Rothlisberger of the U.S. Forest Service; Xinhua Zhu of Fisheries and Oceans Canada; and Timothy B. Johnson of the Ontario Ministry of Natural Resources and Forestry.

The project received financial support from the Environmental Protection Agency through the Great Lakes Restoration Initiative and from NOAA’s Center for Sponsored Coastal Research.