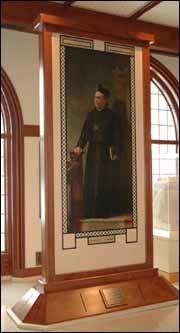 When Notre Dames Main Building was renovated in 1997, it looked as though historic murals of two Notre Dame presidentsRev. Edward Sorin, C.S.C., and Rev. William Corby, C.S.C.and pre-Notre Dame missionary priest Rev. Stephen Badin would be reduced to rubble in a landfill.

Over the years, the muralspainted by unknown artistshad been paneled over and painted over and partially covered by a drop ceiling.

They hadnt been part of the décor of the room for a long time,says Wendy Clauson Schlereth, director of the Notre Dame Archives.

The murals were in a room, now part of the third-floor offices of News and Information, which had once been home to the Columbian Literary and Dramatic Society and other student literary and debating groups. In the late 19th century, the four walls of the room were decorated with portraits of Notre Dame presidents and other historical figures such as Washington, Lincoln, Henry Clay and Napoleon III.

The portrait of Rev. Auguste Lemonnier, C.S.C., Notre Dames fourth president, couldnt be salvaged. But there were still the portraits of Fathers Sorin, Corby and Badin, which archivists felt were of potential historical significance to the University.

Could the murals possibly be saved and restored? The hitch was that the portraits werent painted on canvasthey were painted directly on the plaster.

And the plaster had to come down,Schlereth says.

It helped that hes something of an expert on old houseshes been working on restoring his own Greek Revival house for the past 17 years.

I was curious about how the lathe and plaster were attached to the brick wall,he says.I realized the plaster was connected, but not real securely. The lathe was nailed to small blocks of wood set at regular intervals in the brick.

If the plaster wall were braced, he realized, the murals couldin theory, at leastbe pulled away from the brick in one piece.

His plan involved stabilizing the plaster with a wooden box, cutting around the mural, and gently pulling the plaster away from the outside wall. The carpenters who handled the job added some innovations of their ownfor example, the box was hinged at the bottom, so the muralseach of which weighs over 300 poundscould be gently levered off the wall and onto a table.It was a little easier because we had nothing to lose,Lysy says.

We started with the portrait of Father Sorin,Schlereth recalls.It was just beautiful. The box Peter designed worked perfectly.

Art conservator Monica Radecki has since restored two of the murals. The portrait of Father Sorin is on display at the Northern Indiana Center for History. The portrait of Father Corby, which was restored in late 2007 with a gift from Ursula and D. Chris Bolding, a 1975 Notre Dame graduate, was recently installed in the Eck Visitors Center and is once again on public display144 years after the painting was originally unveiled.

The final painting of the three, a portrait of Father Badin, is yet to be restored. At some point, the Badin portrait was painted over with latex paint.

Were anxious to see if the portrait is interesting enough and salvageable enough to be worth a restoration,says Schlereth.
There are no extant photographs of Father Badin, and the few portraits that exist are head and shoulders only. The mural, if it is restored, would represent the first known full-length portrait of Father Badin.

The role of the Archives, Schlereth notes, is to preserve institutional memory. Most of the records of the University are papers put into boxes and kept for the informational value of the record, she says.This is a piece of history that is far more public and visible,she says.I go into the visitors center and think, thats a job well done.Im glad we saved it. Im glad it all worked.