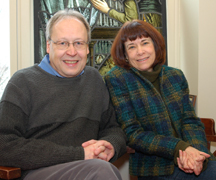 Architecture professors Sallie Hood and Ronald J. Sakal of the University of Notre Dame have a vision.

We don’t need more suburbs, they argue. We need to fix the suburbs and cities we have, creating vibrant, mixed-income and mixed-use communities where stores, homes, churches and schools are within walking distanceand affordable mass transportation takes us to locales farther out. It’s architecture for the common good.

Hood and Sakal joined the faculty of Notre Dame’s School of Architecture in 2005lured from private practice not just by the prospect of teaching their principles of urban design to a new generation of bright and interested architecture students, but also by the University’s mission of Catholic social service.

Their immediate goal was to establish an institute within the University that would function much like a professional design studiobut with an overarching public service mission.

In 2006, that goal was realized with the establishment of the Center for Building Communities (CBC).

The studio has five points of emphasis: working for the common good through a commitment to social justice; patience and servicelooking at both incremental changes in the near-term and major long-term changes; flexibilityunderstanding that different communities and problems require different sets of rules; affordabilityproviding homes, typically of modular construction, for key workers like teachers and firefighters, who often can’t afford homes near their places of employment; and sustainabilitycreating communities that are economically viable, environmentally friendly and welcoming to people of all income levels, races and ethnicities.

Above all, Hood emphasizes, the design must be beautiful. Affordable and sustainable, she notes, needn’t mean ugly.

The CBC’s urban design and architecture services are provided at no charge to clientsinterested cities, not-for-profits or citizen groupswith community problems to solve.

The center’s emphasis on sustainability means designing communities where people save energy by walking, biking and taking public transportation."Green"technologies such as passive solar and edible landscaping (if you’re planting trees and shrubs, why not fruit trees and blueberry bushes?) are incorporated, but not what Hood refers to as"Gucci-belt Green"technology has to be affordable, not just available to those who can pay top dollar.

Students in the Sakal/Hood studio are treated as colleagues and partners in the design process, Hood notes. Students form teams, research the project, and then travel to the location to meet with community members and study the problem directly.

Since the establishment of the CBC, Hood and Sakal have led students in solving real-life urban design problems in cities such as Elkhart, Ind.; Conway, Ark.; Chicago and Wheaton, Ill.; and the 90-block Los Angeles Fashion District.

There are no cookie-cutter solutions here, Sakal and Hood emphasize, and it’s a lot more complicated than simply designing on paper.

“They have to confront very difficult problems, restrictions and constraints, and still be visionary at the same time,”Sakal says.

The problems the CBC confronts are not easy to solve, Hood notes. Things move slowly in the world of urban planning, and the reality is that very few student designs are ever built.“But they imagine they can have an impact on the community,”she says.

That influence will grow, Sakal adds, as students graduate and take CBC principles with them into the professional world.