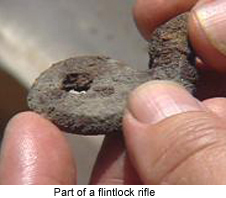 The grounds of a 19th century hunting lodge located on the banks of the Kankakee River in northwest Indianaonce home to marshlands so rich in waterfowl that the area was known as theEverglades of the Northwere also the site of ancient settlements dating as far back as 10,000 years, according to discoveries recently made during an archaeological dig led by University of Notre Dame anthropologist Mark Schurr.p. Held in the area of the Collier Lodge in Kouts, Indiana, and conducted with the assistance of Notre Dame students and volunteers from the Kankakee Valley Historical Society (KVHS), the dig unearthed hundreds of clues to the areas rich past, from prehistoric tools dating to 800 B.C., to hand-blown glass from an early 19th century European settlement. Prehistory is defined locally as any time prior to 1679, the time of the first written history of the area.p. I had expected a shallow and badly disturbed site,Schurr said.But because the site had never been plowed, layers of earth were sealed, revealing centuries of artifacts.p. We opened a total area of 16 square meters and found about one feature for every two square meters. Based on the estimated size of the site and the presently known feature density, there could be more than 500 features present – an incredibly rich site for this area. In 14 years, I have never seen another site like this.p. The large number of features (things other than artifacts that tell about life in the area), makes the site eligible for both the State and National Registers of Historic Sites, according to Schurr.p. Notable features discovered include a late 19th century brick foundation or part of a hearth from a previously undocumented structure, and a storage pit lined in clay from the Upper Mississippian period (A.D. 1100) containing prehistoric pottery, animal bone and charcoal that will undergo radiocarbon dating to determine specifically what was stored in the pit. Also discovered was a buried prehistoric midden, or refuse heap, containing artifacts dating from the Early Woodland period (800 B.C.), when prehistoric Native Americans of the region first started producing pottery. Particularly noteworthy was a flake of obsidian, probably imported from the area that is now the Yellowstone National Monument, dating to the Middle Woodland Period of about 200 B.C.p. Using probes and other specialized instruments to measure datable layers in the previously undisturbed subsoil, Schurr and his team uncovered multi-tiered evidence of the areas historical inhabitants – from beads, tools and dishes of prehistoric Native American tribes to gun parts and fishing equipment from hunters of the early 20th century.p. Other artifacts include prehistoric pottery dating from every known time period, spanning 800 B.C. to imported English pottery of the early 19th century; a fragment of a hand-made stone pipe and seed beads dating from 1820, reflecting the Potawatomi occupation of the site; and a portion of a bone fish hook, indicating that people have been fishing at the site for at least 800 years. Also unearthed were parts of a rare flintlock rifle and a spear point that dates back to 300 B.C.p. With the help of students, volunteers from the KVHS and residents of the area, Schurr and his team will sort and catalog the collection. Together with a volunteer from the KVHS, Schurr will co-present a paper on the findings of the dig at the Midwest Archaeological Conference in October.p. Contact: Mark Schurr, associate professor of anthropology, 574-631-7638 or Schurr.1@nd.edu . p. __